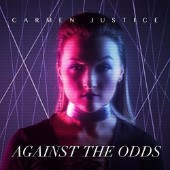 Carmen Justice
Against The Odds EP


If a musical group is easily assembled, then the sad likelihood is that it is just as easily disassembled. Such was the case with the late girl pop ensemble One Girl Nation (later rebranded as simply 1GN). Filling a much needed niche in wholesome and formative spiritual pop for the pre-teen set, IGN released two good albums and an ep with a diminished membership each time out, and is, alas, no more. But out of the remains of that group comes the first of the inevitable solo efforts, and as a surprise, it's from the group's most low-key member, Carmen Justice.

Against The Odds is a very good first effort for Justice, and takes the template of 1GN's modern, hip-hop and dance flavored pop and gives it a more mature, nuanced sound and lyrical bent. The title track kicks things off in fine fashion, with a high-powered call to live life differently as a believer, or, "against the odds." There is a decided 1GN feel here in both music and lyrics, though the dense, almost-industrial dance sound shows a decided maturity. "Ambassador In Chains" continues this mature sound with a fantastic guest verse from rapper Steve Malcolm that ups the intensity. "Vow To You" slows things down just a bit for an 80's inspired love song that would not sound out of place on the Pretty In Pink soundtrack.

But it's the next two tracks where Justice shows her growth and unique artistry. The intense and pulsating "Flaming Arrows" is a take on guilt and accusations that matches its subject's serious nature (the struggle over guilt and shame that Justice hauntingly calls her "shadow") with a mature and spooky vibe that ranks up there with some of the best sonics created in the CCM world this year. Justice's hypnotic, trance-like vocals are mesmerizing, and take the tune to another level. It's worth the price of admission by itself. "Red & Yellow Black & White" is likewise as great, taking the old (and well-meaning, if clichÃ©d) Sunday school song and spinning it as plea for knocking down the racial walls that often are built around the church in the Western World. GabeReal (of Tobymac's Diverse City band) adds a guest verse that adds to the overall atmosphere of the track. "These Four Walls" channels a bit of Lorde with its stuttered beat, while closer "The Other Side" brings down the tempo considerably with a nice piano based song reminiscent of Rachel Platton's "Fight Song," but builds into a great, soaring finale.

With Against The Odds, Carmen Justice has crafted a very good, diverse and mature first solo outing, with a number of songs that rank with some of the best released this year in any corner of the music world. Sometimes going solo shows sides of a performer that couldn't otherwise be seen.