Here at Jesus Freak Hideout, when we usually receive an indie project to review we are given an EP or a full-length LP. Rarely do we receive simply a single - but when we do, there comes an expectation for it to be a complete bust or a song that is absolutely amazing. Whitlee Casey has thankfully given JFH and listeners a song that is breathtakingly awesome with his single "Alive In You Tonight."

Casey's vocals and a light acoustic guitar welcome the listener in gently with a soft verse. However, the song picks up as Whitlee enters the chorus and sings passionately, "Now I'm alive, alive in you tonight. All my worries and fears are drowning in your light." Musically, it incorporates the full "boom-chuck-boom-chuck" of the drums while not making the song feel over-folky. There are so many layers to the track with some thick background vocals that give the song a very rich sound. Thematically, it's got a somewhat worshipful feel as it is directed straight to the Lord, but it doesn't necessarily sound like it is meant for corporate settings. Nevertheless, some worship leaders may find this to be a song that is at least worth trying out; it could be very successful.

What many artists try to achieve with an album full of music, Whitlee Casey has crammed into a single song. The lyrics are biblical, the song is melodically intriguing, the musicianship is full-bodied and hearty, and Casey's vocals are approachable without sounding redundant. Listeners should look forward to the day that this guy releases a full album, because they might find a new favorite artist. 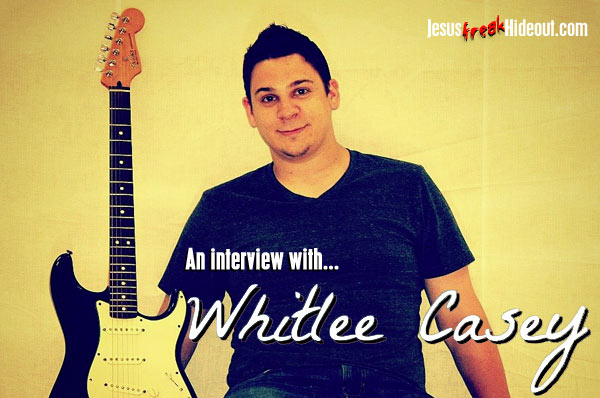 Whitlee Casey: Thanks so much for the kind words, brother! This song is simply a reminder to me of where I was before God radically changed my life as a teenager. I lived in a split home situation with divorced parents and growing up through all that was tough. I felt really alone in life and wasn't sure how to handle it. Then God sent a friend to my lunch table during my 7th grade year of junior high and invited me to their youth group. I grew up in church of course but never really knew the Lord personally. So after a couple weeks went by of listening to the lessons and lyrics in worship, I broke down man! I simply said, "God, I can't go forward in life on my own. I need you to lead the way." I asked Christ into my heart that night and felt so alive again. It was like I heard a voice in my ear saying "I'm here and never leaving you."

Whitlee: That is the plan! I'm currently in the process of figuring out how I want to handle the whole fundraising part of things. Maybe a Kickstarter campaign in the upcoming months. Other than that, songs are written for the record and I'm really excited to get back in the studio to knock it out!

Whitlee: I came across JesusFreakHideout.com by just simply searching for Christian music review sites. I was kinda looking to see what was all out there. I noticed you guys did reviews for independent artists as well and so that's when I emailed John DiBiase about it. And since then, I've had some great chats with him through emails about music and working together!

Whitlee: My producer Matt Adler is simply one word... INCREDIBLE! He is also a fantastic artist out of San Antonio, TX and most of the wonderful sounds you hear on "Alive In You Tonight" are from him. From acoustic, electric, bass, bells... He did some amazing work for sure. On drums, we have Blake Alexander, and on Banjo was Austin Davis who plays for Texas country group Josh Abbott Band. So it was a lot of fun working with those guys.

Whitlee: Well, I just opened for MIKESCHAIR in Rockdale, TX and I've kinda got my ear on their tunes right now. Also, folks like Phillip Phillips, Tenth Avenue North, and NEEDTOBREATHE just to name a few.

Whitlee: One thing... GOD'S WORK! No matter where He takes me, I remind myself that I didn't get to where I am based on what I've accomplished but what He has allowed for me to do by following Him through ministry on the road! I think every artist wants people to hear and know their songs, but I think for Christian artists, we have a bigger mission than just that. We are here to bring the message to those who are lost and hurting!

Whitlee: OH WOW!! Okay here we go:
My Top 5 Guest list: Michael Jordan, Brett Favre, Tim Hawkins, Kari Jobe, and Jim Carrey
Food Beverages: Mountain Dew (Baja Blast) ...Ya know from Taco Bell only.. Why is that?? lol
I'm a big seafood guy so like a shrimp plate and some crab legs!
SPARKLERS EVERYWHERE!! You would never run out of sparklers at my party... Just sayin!!