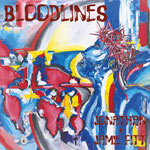 
Though it's no Nashville or Austin, the city of Philadelphia does have a music scene of its own, spawning acts like mewithoutYou and The Cross Movement, among many more. One of its lesser-known acts is a duo of brothers named Jonathan & Jamie Fitt. Directors of the Philadelphia Tabernacle of David, the duo released some live albums (under the ministry's name), but have now embarked on a journey into recording studio albums. Their first album, Bloodlines, released earlier this year, and it's a bit different than what you'd expect from a live worship artist.

Though Bloodlines is rather musically diverse, most of the music finds a comfortable groove in progressive rock. The best moments on the album are when the Fitts take the rock style of Alan Parsons Project and mix it with the high energy (and slightly heavier riffs) of bands like Petra. That's not a perfect description, but it should give you an idea of what you're in for. "Echoes of Eternity" is an early song on the tracklist, but it features some of the best music on the album. An anthemic guitar is soon joined by driving rock music that gets your foot tapping and head bobbing. The hook gets a little too repetitive, but it's easy to overlook when everything else is so solid. Though a lot of the middle portion is much quieter, the rock returns with some southern gospel and funk influence in "Abundance," which focuses on God's complete ownership of all things in the earth ("For the gold and silver are Mine, and the world and its fullness are Mine, and the beasts in the field they are Mine, and all wealth and riches are Mine"). The funk vibe continues into "By Your Light," which also features a ska-like guitar structure and some upbeat, jazzy piano licks. It almost comes out of left field, but it really fits the overall scope of the album and sounds great.

The Fitts clearly excel in their brand of rock music, but their slower songs are also terrific; the best example is a song entitled "Blood of the Lamb." Musically, it's equal parts "Africa" by Toto and "Wicked Games" by Chris Isaak, featuring a slower, almost industrial-influenced, electronic beat with gorgeous guitar licks and delicate piano and synth. "High & Lifted Up" has hints of the anthem rock, but is actually piano-led and more in the realm of a ballad. The hook borrows from the Book of Isaiah: "You are high and lifted up, and the train of Your robe fills the temple." The tempo picks up a bit in the bridge, with more powerful vocals and louder guitar and drums; this happens after an odd rap break that, stylistically, doesn't quite fit with the song.

There isn't much to say that isn't good about this album. Some of the musical choices may not have been best suited for their surroundings, such as the aforementioned rap in "High & Lifted Up" or the disco/dance music in "Mahanaim" - though, to be fair, the song is about a victory dance, so it makes some sense. Other than these, and perhaps some spots where the vocals can be a bit dry, there's a lot to like. The Fitts are fantastic musicians with a strong creative vision for their songs and artistry, and their love for the Lord is captured in the worshipful and victorious moments in the album. I also really like that some of the songs are long. A lot of times, an album with a lot of long songs can be a turn-off. But here, the length of the song is there to expand upon itself and create an atmosphere to reflect on both the music and lyrics. I don't know that I ever felt like any of these songs were too long.

Bloodlines is a surprising musical adventure unlike what most bands are producing these days. It's extremely easy for people to create and release albums these days, which can, understandably, cause some cynicism in music fans wanting quality content. Jonathan & Jamie Fitt went into this album with strong ideas and came out with an album that's easily better than most major label releases this year. If you're looking for some good, new rock music, I'd recommend you check out Jonathan & Jamie Fitt's Bloodlines. 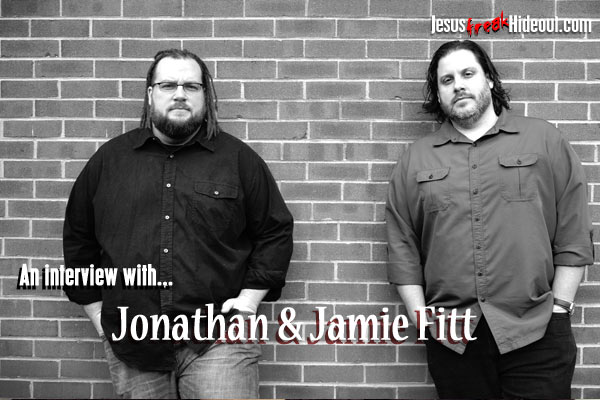 Jonathan: Well, we are directors of a ministry called Philadelphia Tabernacle of David, and we have been involved with a number of recording projects through that ministry over the last few years. Those projects have generally been spontaneous worship sets that were recorded at conferences we have hosted over the years, and included a number of other people associated with our ministry, so they went out under that name. In reality, recording studio versions of pre-written material for Bloodlines was quite a departure from what we have been mostly doing. And since this was a project written by just the two of us, we decided to release it under our names rather than the ministry.

Jonathan: I guess you could say music is our day job. We are both in full-time ministry. We stay pretty busy with our weekly ministry in Philadelphia, as well as traveling somewhat extensively leading worship and teaching at conferences and other gatherings. We also both have four kids at home, so whenever we are not on the road, we are usually spending time with our families.

Jonathan: Actually, the artwork is an oil painting that was done by a friend of ours who is a pastor and an artist: Nick Okore. We just loved the piece and it spoke so well to the theme that we had in mind for the album. If you look carefully, you see Jesus hanging on the cross, dying for the nations.

Jonathan: We are all very much a product of the bloodline we come from; much more than we probably realize. Both positive and negative things can exist in our bloodlines and family trees, and they are passed down to us for better or worse. Many times our bloodlines become corrupted and perverted by the enemy, but there is healing and deliverance for all who will receive it. Jesus died to redeem every bloodline and family tree. Many of the songs are about this theme.

As for us, we dedicated the album to our grandmother. She and her mother were church planters, and led worship music with traveling evangelists. We didnt find this out until close to the time of her passing, but it is her shoulders that we are standing on in many ways.

Jonathan: We probably dont collaborate the way most other songwriters do. I cant remember a time we have ever sat down for a song writing session. Certainly not for this album. More of what happens with us is the songs happen to us while we are worshiping. When we lead worship in churches or conferences, the majority of what we do is spontaneous or unrehearsed music. Often times we will capture certain moments that we felt were unique or powerful in some way, and they will become the basis for a song. There are a few songs that one or the other of us wrote by ourselves, but most of our music is birthed out of the spontaneous flow. With all that being said, I am generally more focused on the music and Jamie on the lyrics.

Jonathan: This is a tough one to answer. I guess it's not something we have put much thought into. Our music/message seems to resonate with a very wide variety of social/economic/ethnic groups. At our ministry in Philadelphia, we have one of the most diverse groups coming together that we are aware of. We are actually very proud of that fact.

Jonathan: Not exactly new, but Andrew Ehrenzellers album Beauty Is What Remains is a fantastic album Ive been listening to a lot recently. As far as worship music, we like everything from old Vineyard albums to guys like Rick Pino and Jason Upton. But we also listen to a lot of other styles and genres of music as well.

Jonathan: "Mahanaim" is actually a Hebrew word meaning "two camps." It comes from Genesis 32 when Jacob was encamping his army, and he stumbled upon a camp of angels, or "God's Camp." He called that place with both a camp of angels and a camp of men "Mahanaim." There is a certain synergy or partnership between the armies of heaven and the armies of Earth. It is our intentional partnership with the purposes of God in the Earth that ignites this synergy. We call it "the dance of the two camps," and thats what we are singing about in this song.