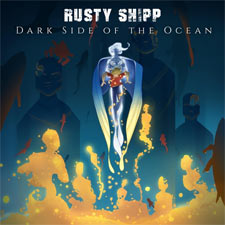 Rusty Shipp
Dark Side of the Ocean


It's been three long years since the boys of Rusty Shipp have released an album, but that doesn't mean they haven't been hard at work playing shows, festivals, and releasing several new singles leading up to their third full-length album, Dark Side of the Ocean (the complete title officially being Cosmic Innuendo, Vol 1: Dark Side of the Ocean). Dark Side of the Ocean is a concept album just as their previous effort, Liquid Exorcist. This time, the guys are playing on some Pink Floyd references (see the title) and focusing on the balance of dark and light, descent and ascent, as well as men and angels. The album itself is split into two halves, with "Dark Side of the Ocean" through "Bioluminescence" (tracks 1-10) being called Descent and "King of the Deep" through "The Other Side" (tracks 11-17) being called Ascent. The story revolves around a drowned sailor who sinks to the bottom of the ocean where he is rescued by "sea angels," and visits an angelic kingdom ruled by "Poseidon" (Descent). Here the protagonist meets "Poseidon" in the underwater angel kingdom. Eventually, these angels come to the surface to discover why men keep sinking, with a duty to help them (Ascent).

The brief intro track that sets up the underwater journey transitions perfectly into the first song, "Living Waters." All I can say is that riff is killer. The first time I heard it, I knew this album was going to be good. As you move forward, you realize that this album follows a similar pattern to Liquid Exorcist with there being interludes between many of the songs. Coming off that first interlude is my favorite song on the album in "Bottom of the Barrel." It's got another great riff, but the melody in the chorus is so singable and sticks with you, "Down at the bottom of the barrel, still your love is bottomless. The weight of the world is crushing me to a pulp, but it brings my soul to the surface. And if I make my bed in Mariana Trench, I'm welcomed to a city that's lit bioluminescence." While I'm not a fan of reggae-like songs, something about the spooky feel of "Tanninim" (a sea serpent) just feels right. From here, they jump straight into the punk and surf rock jam of "What's Kraken?" -- another sea monster, but also used as a play on words. Another part of the album that stands out is the sea shanty "Fish in the Sea." It's just another moment to tie the story together, but it works so well and sounds authentic. The ska sounding (think Sublime) "Angels Aquarium," and the ambient "Bottom of the Barrel" reprise "Bioluminescence," ends the first half of the story.

"King of the Deep" kicks off Ascent, borrowing the keyboard from "Tanninim" and the sea shanty feel of "Fish in the Sea." The song starts with acoustic guitar, but eventually works its way to a thicker sounding electric guitar with distortion/fuzz. "Man Myth Legend" is pure modern surf rock goodness with all of the licks and solos harkening back to the 60's when this style was so prevalent. "Us and Them" is in contention for album favorite and the way it builds musically is very enjoyable -- as is the solo towards the end of the track. "Up the Waterspout" is the most rocking of the interludes and is also one of the longest at one minute and thirty-three seconds in length; it's a fun little jam. The story finally ends with "The Other Side." While it opens with an acoustic guitar, the song eventually ramps up to another surf rock/ska flavored number. In it is found another great lyric as Russ sings, "People always look for Heaven in the wrong places as if it's just somewhere you go on retirement vacation. But a wise man once said that the Kingdom of Heaven is within; try looking there and let me know when you find it."

Deep story and concept aside, Dark Side of the Ocean is a rocking album. Musically, it goes back to the band's roots. There's a lot of the punk sounds from Mortal Ghost, and multiple surf rock sections drenched in reverb (a sound I missed on their full-length debut). This could also be the band's most accessible album as well. Nautical rock 'n' roll is a slim niche, but the musical backdrop here is fantastic. While I may prefer the rawer sounding version of Rusty Shipp found on Mortal Ghost from a personal standpoint, this well-produced (but not overproduced) version with absolute ear worm melodies and head banging riffs is just so dang appealing. Songs like "Bottom of the Barrel" and the haunting "Tanninim" stay locked in your brain. No knock on Liquid Exorcist, but the Captain and his crew have really stepped their game up this time around. Fans of the band will absolutely love this album, but this is also a great time for those that haven't bought into the hype to give the band a good listen.