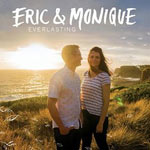 Husband and wife duos are becoming pretty prominent in today's music world and many of the spouse team-ups feature a more folk/country/Americana type of sound. Eric & Monique also have that similar vibe musically and each song is strongly rooted in the piano. Eric Johnson plays piano, keyboard and sings while his wife, Monique, also lends her vocal talent. Both have nice voices, but Monique's is a bit more striking. Each song on their album, Everlasting, is based in scripture (Most notably Isaiah 40:28) and their album artwork gives the verses that inspired each song.

The album is split into two acts. The first half of the album deals with doubt and struggle, culminating with "Doubting Thomas." "Surrender" is the barrier that splits the two acts. Eric and Monique sing a beautiful, albeit short, folk inspired song with heavy banjo and mandolin usage. "Surrender" clocks in at less than two minutes, but its composition and lyrical content make it one of the best the album has to offer. From here, act two starts. The title track is another of the album's better songs and really sells the theme of faith and the everlasting God. The couple sings, "Wonderful Savior. Almighty Creator. Merciful healer. You are everlasting. Perfect in splendor, yet humble in nature. Your kingdom forever; You are everlasting." Heading towards the album's closing, you will also find the track "Orion." The song about Heaven is definitely another song of which to take note. Finally, the album concludes with "There We Rise." The song remains at the same slower tempo that the rest of the album follows, but the orchestral arrangement gives it a more grand and triumphant sound than some of its counterparts.

It's honestly hard to not look at Eric & Monique and pass them off as just "another husband and wife duo." In a way, the Johnson's do give you the sounds of Gungor and other similar artists you've already heard, but the approach feels a bit different. The songs are steeped in scripture and presented in the fashion of a concept album of sorts. Eric Johnson is certainly a talented pianist with a raw vocal talent and Monique has a beautifully salient voice that easily stands out in the mix. The music available on Everlasting is certainly not the most groundbreaking thing you will hear, but it is enjoyable and well executed. Don't pass on Eric & Monique's second full-length simply because you think you've already heard them somewhere else; give them and their approach to song writing a chance. If you do, you may just find yourself coming to grips with your own personal struggles with doubt -- just like doubting Thomas -- and realizing more just how everlasting and faithful our God has always been.