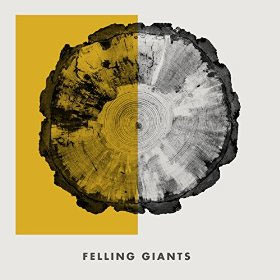 CS Lewis once said, "Even in literature and art, no man who bothers about originality will ever be original." Indie band Felling Giants seem to be a band that has a mission to make honest music with the glory of God in sight, and whether that's original or not doesn't seem to be their end-all. With their latest, self-titled release, they're giving their infusing their blend of alternative indie rock with the aim to worship the Lord.

The album opens with the radio-infused "Scars," sharing the message of letting the scars of Christ define us, instead of the scars of our sin. The truth in the track is fantastic, however musically it never seems to really take off or climax. Following the opener is the piano driven "Skeletons." Without a doubt, this track makes up for the missed energy in the opener as lead singer Chris Kroger sings about God bringing the dead in sin human being to life in Christ. "Son of Man" introduces listeners to a bit of the more ambient/softer side of Felling Giants. It would be easy to imagine a church youth group singing this song on any given Wednesday. The music has a very corporate sound and is easy to follow along with. "Arise" gives listeners a bit of an anthem to sing along to, while not berating listeners with overkill on a thumping drum or crowd chants. On the contrary, the drums have an epic sound to them that could make anyone within listening distance want to throw a fist into the air and sing along.

"Giants" is a more introspective song that uses the analogy of giants and tribulations being overcome by the blood of Christ. While this song may have glimpses for a corporate setting, it feels more like a reflective song for the believer. Special note should be mentioned for the music; it features some amazing programming/synth layers that make the track a musically rich gem. The album concludes with the passionate and encouraging "Keep Holding On." It's a sweet track reminding the church of Christ's love and the grace He shows in saving the unbeliever. It's an excellent way to end the album - not drawing it out but singing a beautiful song of gratefulness to the savior. Instrumentally, it's complimented well with piano, acoustic and dashes of cello, making a great combination.

In the end, Felling Giants isn't bringing anything extremely different to the table. However, what they do is performed with great skill and honest passion. Their sound harkens back to late 90's alternative music while not ignoring popular contemporary trends. Worship leaders looking to add more music to their church music library will find some good tracks here. Casual music listeners may be taking a gamble with this release, but they might be pleasantly surprised. Overall, Felling Giants has a solid release here. 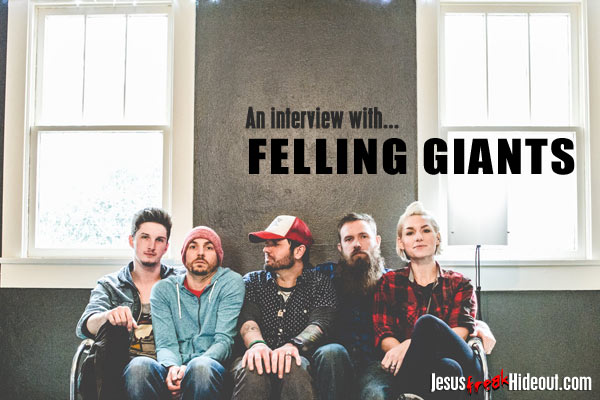 Chris Kroger: This has been a dream of ours for as long as I can remember. I cut my teeth in the Chicago music scene before coming to The Lord. Since then, the focus of our lives and therefore our writing has become the great truth of Jesus, who He is, what He's done for us all.

Chris Kroger: Ryan, I'm so glad you noticed this and appreciate it. We take a real pride in everything we put our hands on. We want to bring our very best to everything we do. Whether serving at our home church, our lives outside the church, crafting songs, live performances, or our design. I know I'm a little partial, but honestly, I'm blessed to get to work with some of the most gifted people ever. Chris & Natalie Garret (Our synth & keys team) are ridiculously gifted artists. Whether photography, painting, their musicianship, you name it, it's amazing. Chris Garret handles all of our design in house. He has this uncanny ability to take any vision cast and really bring it to life. The name Felling Giants comes from 1 Samuel 17 and the story of David and Goliath. This beautiful Truth that God desires to destroy the giants in our life, if we would only allow Him. We all have giants of our own. For me, it was 15 years of alcoholism and drug addiction. But praise be to God who always leads us in triumph through Jesus! The cover art of the EP is actually a photograph that Chris Garrett took. It's a photo of a local beetle kill stump. We've lost a lot of trees in CO from these beetles. Chris captures a picture of something dead, and makes it beautiful. Connecting our story as disciples of Jesus, of death to life, beauty from ashes. That and we just like cool album art, posters, stickers, tattoos, etc...

Chris Kroger: We want to share the hope of Jesus. We want to share what was so freely given to us, this beautiful gift of Grace. We believe God at His Word and we believe He desires to do amazing things through the simple obedience of us, His Church. We look around and we see a lost world, generations of people desperate for hope, desperate for change, desperate for true life instead if existence, but unable to be fully honest about it. We were all at this place once before Jesus wrecked us. We want to sing anthems of Victory, anthems of Hope, anthems for a chosen generation, anthems of the transforming power of Jesus for all.

Chris Kroger: Yeah, JT's awesome. I'm a big fan of his work with Paper Route. He and Johnny Macintosh make up the magical power duo that is The Sound Kids. I knew I wanted to work with them before the band had even formed. I've known Johnny for a while and knew I wanted to work with him if I ever had the chance. The Sound Kids had just wrapped up the newest Third Day album (Lead Us Back) and it just all fell into place. It was pretty rad to have these guys working with us on these songs and really pushing us as a band. They're doing the new City Harmonic right now and it's sounding incredible. That's a nice little sandwich right there: Felling Giants, The City Harmonic, and Third Day. Sounds like a pretty awesome tour to me bro (hint hint!) :) All joking aside, these guys are amazing at what they do and we were blessed to work with them.

Chris Kroger: The Lord's been opening a lot of doors for us. It's all happening kind of fast. We're hoping to join the line up at this year's Heaven Fest in Denver and we're heading out to CA to play Joshua Fest in Sept. Both these events have some amazing lineups and we're honored to be included. We definitely see touring in our future and we're always writing. The songs just keep coming. Hopefully we'll be talking about our full-length with you guys before too long.

Chris Kroger: From the start of all of this, God's really been teaching us to set aside expectations, which is really hard to do. We all have expectations. Ours usually include smoke machines and light shows. I think it's an ongoing challenge for us all really. However, He's been so faithful to show us that He's always moving and He's going to move in ways we could never imagine. That's how God rolls. We're excited and expectant for all He has and we're blessed that we've been invited through Jesus to be a part of God's beautiful plan of redemption.