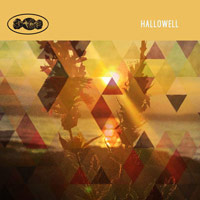 
Hallowell begins with a four-part story of youthful rebellion that leads to the eventual, exhausted embrace of an inescapable God. Ultimately, that is the nuance that besets the rest of the self-titled debut from Bifrost Arts co-founder Joseph Pensak. This collection of sacred music is decidedly indie folk in character, with simplistic, emotive performances that rival the sonic cousins of Sufjan Stevens and Dave Bazan. This backdrop makes for subtle settings to traditional texts, which works really well since it seems that Pensak's strongest suit is his poetic text-painting. Each of the hymns is given a complex treatment that their thought-provoking layers deserve. The hymnal base of the album can begin to feel a bit drone-like from time to time, as is often the plight of the straightforward verse-chorus structure, but Pensak is able to switch things up when necessary (the driving outro of "Tho' Dark Be My Way" is a standout in this regard). Pensak just as easily navigates the regal and somber as he does the cheery and hopeful.

Both a postive and negative, more originals would have been much appreciated on Hallowell. Each of them - "The Wreath," "Golden In Spring," "Another World," and "You Take It All" - end up being the true gems of the album thanks to Pensak's cutting lyrical style. A verse from the poignant and shifty "You Take It All" has stayed with me since my first listen: "In imagined solace, I'm alone/Banish all unlike us, it's them that's wrong/We're a fallen nation waving bye/Buzzin' country station, hate for hire." Still, Pensak's delicate dressing of sacred sentiment makes his debut a worthwhile effort, and the few peeks we get into his lyrical ability mean that this Vermont pastor should be more than welcomed as an impactful voice in the liturgical music repertoire.