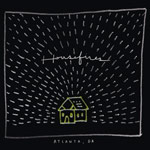 Housefires, a group of musicians from the Grace Midtown Church in Atlanta (a series of individual house churches in that meet together in the downtown area), hit a grand slam on their last outing (the numerically numbered II) with "Good Good Father." This elegant and simple expression of the fatherhood of God has been covered by the likes of Chris Tomlin and Zealand Worship, and is a strong contender for "worship song of the decade."

A song like that gives a band an even greater platform and budget, so it's refreshing that the group didn't try and go with an over-produced follow up album. Instead, they opted to complete the trilogy of albums with a sonically similar, live album of original tunes.

An album like this (essentially a concert album) should be graded on the merits of the songs themselves, and not on the odd stage banter, bad jokes and other hallmarks of a live recording in a crowded room. By that metric, III is full of songs of great potential, but it's hard to gauge their full measure in this mostly acoustic setting. (Think of an unplugged album without the context of the "plugged" songs to go by.)

Having said that, III has the intimate feel of a Saturday night worship service with no agenda other than to worship collectively. After a brief, almost a cappella call to worship in "Filled With Your Glory," "Your Love Is Alive" rings out clearly with a sharp melody and a great use of a violin counterpoint to add depth and drama to the tune. Lyrics like "Your love is beating inside of my heart and my soul and my mind / your love is alive / your love is alive / your love is leading me into the way and the truth and the life" show that the Housefires crew take a sometimes tired expression (of something that's inexpressible) and give it a crafty spin. A subject as universe-binding as the love of God deserves a fresh take every time out, and "Your Love Is Alive" is a deeper and more well-done song than the pedestrian title would suggest.

The same goes for "Life Is A Gift." The repeated refrain "life is a gift / and the Giver is good" is passionately delivered and wonderfully repeated by the congregation of singers. The sentiment of this song is perhaps an over-done "positive" mantra, but the slight twist of mentioning that "the Giver is good" takes the idea and breathes fresh life into it.

That is perhaps Housefire's greatest strength--taking a well-worn idea and turning it just slightly to reveal a new, interesting angle. "Good Good Father" doesn't say anything particularly groundbreaking, but the slight angle of the song, the timeless subject and its great melody makes it more than the sum of its parts.

So too is it with the songs on III. Nothing here is sonically or thematically groundbreaking, but the album does capture something in its presentation and stripped-down nature. With hints of Hillsong United (especially in the "Oceans"-like "On And On") and other local church-centric recordings, Housefires is a "movement" with great artistic potential and a sincere heart for leading God's people in worship. III captures an honest and heartfelt night of worship, with songs that have just enough interesting angles and moments to engage listeners. It will be interesting to see where the band goes from here.

It's been two years since the previous release from Housefires, an independent worship band that continues to write and release heartfelt and authentic worship music, including the hit worship anthem "Good, Good Father." Their latest offering, Housefires III, continues with the folk-worship sound, complete with "whoa's," acoustic guitars, and stomp/clap percussion.

The songs are long on this LP, with 3 of the 12 tracks clocking in at over eight minutes, and all tracks lasting over five minutes. The first half of the album consists mostly of mid-tempo songs, which causes a bit of a lull a little too early on. Thankfully, vocalist Kirby Kaple adds some variety in highlight "Mountain to Valley," which opens with her raw, earthy vocals set to the sweet acoustic guitar and building drum beats over a distant, atmospheric sound before adding the keyboard and violin to the mix, giving the track an epic feel. Another highlight, "Seek First," brings a much needed energy boost to the set.

Because this is a live recording, we get to hear the dynamic interplay between the band and the audience. The track "Life Is a Gift" has a humorous moment towards the end, when vocalist and guitarist Pat Barrett sings "Even my job is a gift from You / Some of y'all don't believe that" and the crowd laughs. Worship albums don't usually include humor, so this is a pleasant surprise.

Housefires III, as a whole, is not a groundbreaking worship album, but it is filled with wonderful live moments, truth-affirming lyrics, and skilled instrumentation from the musicians and vocalists. This is the kind of record that was made by worshippers for worshippers, and should be listened to during personal worship time in order to be fully appreciated.