Kenaniah Band features brothers Jason and Clint Bicknell. While the brothers have been leading and serving in worship ministry together for over 20 years, Kenaniah Band was formed in 2015. The band's name is inspired by the story of Kenaniah -- who was the head Levite in charge of singing -- found in 1 Chronicles. The band led by the Bicknell brothers is worship focused, but carries more of a late 90s to early 00s alt/rock sound. Their album, I Say, brings to mind a band like the Rock 'N' Roll Worship Circus.

The talent found in the band is evident. The vocals are nice (and remind me a little of Mark Lee Townsend), the instrumentation is tight, and the production is solid for an indie release from 2015. The guitar solo in the first song definitely lets you know that you're not listening to a typical modern worship set. The lyrics are also Christ-centered and worship-focused throughout. For instance, in the acoustic number "At the Cross" they sing, "At the cross You wait patiently to take every chain away from me. At the cross where one step can turn the darkest of night to the brightest morn. I leave it all and then some more at the cross." A highlight musically is found in "You Are God." The guitar riff drives the song and has a cool feel. This one will certainly get your head bobbing. Then to keep the momentum going the group follow that up with another upbeat and rocking tune in "What a Beautiful Day." Both songs ooze fun, beg for you so sing along and honor and worship our Creator. In general, the album is catchy and contains a lot of hooks to get stuck in your head.

I Say is an extremely fun album to listen to and has a really nice flow and mix. There are three acoustic songs, two piano numbers, and seven more rock-oriented jams. The slower acoustic and piano songs serve as a nice change of pace from the catchy rock tunes and the track listing was put together well. The album never feels like you get too much of one thing at a time. The songs sound great, but I'd personally love to hear a remastered version of the album to spruce up some of the production. The production value is far from poor, but it's the closest thing to a weak spot on I Say. This isn't a new album, but it will probably be new for most. Fans of Rock 'N' Roll Worship Circus, or other rock-based worship groups, should give Kenaniah Band a listen as it's likely to be right up your alley.

With their 2015 debut album, I Say, the Ohio natives in Kenaniah Band have made it clear that their purpose for making music is to worship the Lord with straight-to-the-point pop rock. They don't attempt to reinvent any wheels or break any glass ceilings, but I Say proves that they don't need to. Songs like "Holy Is The Lord" and "Great I Am" blend together driving rhythms and keys that seem greatly inspired by acts like The Afters and Delirious? (with maybe a touch of older Sanctus Real), with lyrics that center on the goodness and holiness of God. "You Brought Me Home" even has some pop punk-flavored guitar riffs, vaguely resembling some classic Relient K or Hangnail. Meanwhile, the band displays its softer side in "Be More" and "Find Jesus," while "At the Cross" takes us down more of a country/bluegrass road. But at every genre change, the focus always remains on Christ and His gift of salvation. It's definitely worth a listen if you're looking for something lighthearted and worshipful.
- Review date: 2/20/22, Scott Fryberger of Jesusfreakhideout.com 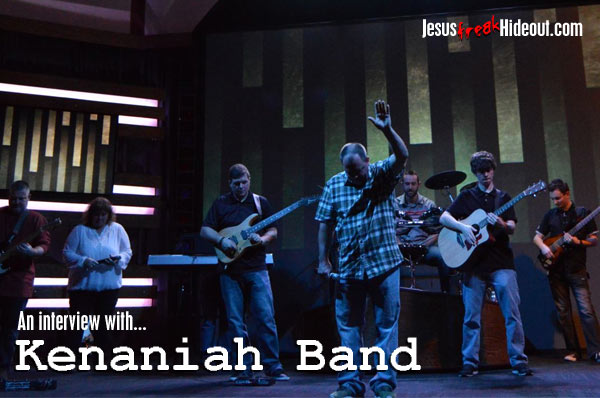 Clint Bicknell: You are right, there is not much said about Kenaniah in scripture. But what is documented in 1 Chronicles 15:22, is that he was a leader of singing and he was skillful at it. As Worship Leaders in our local church, we wanted to commit ourselves to doing everything with excellence to Honor God in our roles as leaders. The name Kenaniah just resonated with us.

Clint: Actually, we are not familiar with Rock 'N' Roll Worship Circus. As a guitar kid growing up in the late 70's and 80's I guess you are what you listen to; I loved bands like Kansas, Toto, Van Halen, all the greats. As we began to write our own songs, we just played what we knew. As we progressed (especially lyrically) I'd say our biggest influence has been Steven Curtis Chapman, hands down the greatest songwriter ever!

Clint: Like most of our songs, "You Brought Me Home" came out of some sermon prep with our Pastor. In Roman times, parents were encouraged to throw away newborn children that didn't "measure up" onto the trash heaps to die. Sometimes people who couldn't have children would go to the trash heap and bring a baby home to raise as their own. Our pastor was teaching on being adopted into Gods family with all the rights of a natural child. As found in Paul's description in Romans 8: We thought it painted an incredible picture of God's grace and mercy and the song was born, "You picked me out, You picked me up You brought me home, You adopted me into your great family!"

Clint: It so hard to choose a favorite, each song represents a point on our spiritual journey and something God was teaching us at the time. But I'm partial to "Be More" and "Find Jesus". For live performance, "What A Beautiful Day" and "You Brought Me Home" are always a ton of fun.

Clint: Yea we've gotten behind on our studio work with the ministry/leadership roles we were in at church. In 2020, we both handed off our roles to some young people we had been investing in and training up over the last several years. We've just recently got back in the studio and started working on our next project, hoping to get it release early 2023.

Clint: We've always been focused on church/corporate worship primarily, but now that we've stepped out of weekly ministry requirements we are focusing on recording in the studio and kicking around the idea of starting to play out more if that's something God opens the door for.

Clint: There are two verses that have driven most everything we have done, both in how we live and in how we lead.
John 4:23-24 (NLT)
23' But the time is coming-indeed it's here now-when true worshipers will worship the Father in spirit and in truth. The Father is looking for those who will worship him that way. 24' For God is Spirit, so those who worship him must worship in spirit and in truth."
This scripture was played out in a song we wrote called "I Will Worship". You can find it on streaming platforms if you would like to check it out. Apple Music, Spotify. YouTube.
Our other favorite scripture would be Romans 12:1.
"Therefore, I urge you, brothers, in view of God's mercy, to offer your bodies as living sacrifices, holy and pleasing to God-this is your spiritual act of worship."