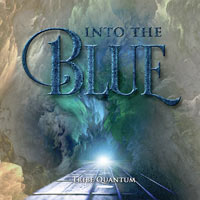 Brothers Jonathan & Jamie Fitt went on a journey to go worship in cities where blues music was birthed with the belief that prayer could change the sound of nation -- much like blues did throughout the country.  The brothers traveled to major blues towns, such as New Orleans, Memphis, Chicago, Detroit, St. Louis, Kansas City and others, with a lot of the lyrics reflecting the stories experienced along the way.  Into the Blue was the album the Fitt’s recorded after this trip (released under the name Tribal Quantum), but there is also a companion book of sorts titled, Glory in the Blues: A Worship Jouney.

Given the album’s title, and the story that led to the album itself, one can only assume that this is a blues album.  That assumption would be spot on as a bluesy rock sound serves as the soundtrack to the Fitt’s story.  While you may not expect modern worship leaders to excel in the blues, the brothers actually present quite an impressive foray into the genre.  “When the Lights Come On” starts the album off with a blues jam, with what feels like a little southern gospel inspiration.  Guitars, harmonica, organ, and fiddle dominate the fast paced opener.  The organ steals the show musically, but the dueling guitar solos at the end are a close second -- especially when they play in unison, a-la the Eagles.  “Body Slammin’ Love” is a bit of an interesting cross of the love of Jesus and WWE wrestling.  A hot riff and guitar lick start the track off right and continue to be highlighted throughout the entire runtime.  Though we’ve already heard a good variety of instruments in the record, this song introduces one more with a nice sax solo.  “Fullness of Blue” slows the tempo with a more traditional blues approach to the music.  “Dippin’ Pool” picks the pace back up a notch with big drums and a blues/rock sound with a rhythm extremely similar to The Strangeloves “I Want Candy.”  More of a country type sound (with a definite hint of blues) can be heard in “Taken Away.”  The song is a deep one lyrically and gets it the heart of where the blues started -- slavery.  The story starts with tribes in Africa selling their members into slavery, and continues with the long boat rides over to America.  The lyrics later go on to compare the African tribes sold to Joseph, who was betrayed by his own brothers and sold into slavery.  Jonathan sings, “We turn to the story of Joseph; sold by his closest kin.  But what they meant for evil, God used it for good, and taught Joseph to dream again.  So in the midst of the darkness on this raging sea we sing to the generations, “You’re not a slave; you’re blood bought free’.”  While it may be a touchy thing for a white guy to sing of such atrocities, the Fitt’s do it with class in paying homage to the origins of blues music and giving glory to God for His redemptive nature.

“Live in the Name” comes back with a typical blues riff to recover from the super heavy subject matter of the previous song.  This one is a bit unique in the fact that Fitt proclaims, “I’m not here to sing no sad songs; I’m not here to sing no blues,” in a blues soaked number.  The bass guitar stands out in this one with a really prominent bass line throughout.  The slowest track on the album, however, is very likely the best it has to offer.  “Scarlet Thread” starts in similar fashion to “Fullness of Blues;” more traditional and very guitar focused musically.   The song discusses the fall of Adam to Jesus’ sacrifice on the cross and has a pretty killer guitar throughout; it’s easily the favorite.  “Out of the Darkness” closes the album and is by far the most varied and different track present.  What appears to be another slower blues song turns into some sort of up tempo pop/dance track starting around the 4:40 mark.  The song eventually shifts back to a blues rock focus just past seven minutes, but moves back to the dance sound yet again.  Finally, the song ends with the slower blues sound that it started with.  The closer is a bit of an odd hodge-podge of sounds and will likely not appeal to the general blues fan.  Credit should be given for exploration and experimentation, but the peculiar execution seriously holds it back.

While there are several artists who release songs, or even albums, with blues inspired, or flavored, music, it’s hard to find a straight up blues album in the Christian market today.  Jonathan & Jamie Fitt’s 2015 examination into the history of blues, and the subsequent album, should make any blues fan happy.  The guitars are on point throughout -- especially with the multiple dueling solos -- and the rest of the instrumentation is superb.  While at times you may like the vocals to be a little less clean, and a little grittier, they are still proficient throughout and help to carry the sound.  Into the Blue is a solid blues album with an extremely positive and spiritual message.  Fans of blues music should certainly give this album a listen and expect to like what you hear.  Bravo to these brothers for releasing such a stellar album in an underappreciated genre in the Christian industry.