There is a tremendous history of children's albums within the course of modern Christian music. From The Music Machine and Bullfrogs And Butterflies (two of this reviewer's personal favorites as a child) in the 1970's, to Salty The Singing Songbook and Patch the Pirate in the 80's, all the way to VeggieTales' dominance in the 90's and beyond, there will always be a place and a need for creative and redemptive kid's songs that share God's love and entertain in equal measure.

British troubadour and all-around goofball songwriter Michael J. Tinker fits well into this metric, with a series of off-the-wall Topsy Turvey Kingdom albums featuring silly characters (such as the aptly named Mr. Grumpy and the Arnold Schwarzenegger-inspired security expert, Igor) and Brit-pop inspired anthems of God's grace and other Biblical themes. Sounding a bit like The Wiggles and a little like the early Newsboys, Tinker has created a winning formula for his music, and his new album, Mission To Dendros continues this streak.

With a loose plot centered around a space trip to the planet Dendros, the friendly kid-pop of the album comes by way of the "mix tape" that the crew plays during the voyage (an idea seemingly inspired by the Guardians Of The Galaxy films). After a brief introduction to the crew at the top of the album, the good-time rock and roll starts off with "Relentless Love," an infectious little tune that riffs on spaceman Buzz Lightyear's famous catchphrase. The following "It's All About Grace" starts off with a fiery, yet comically overdone, preacher talking about grace before vamping into a sing-song, oddball tune with children singers and enough time and key changes to keep things interesting. "Jacob Had Twelve Sons" is a gentle folk song walking through the Biblical narrative of the Abrahamic covenant, and the rollicking "As For Me And My House" (featuring renowned bluegrass banjoist Ron Block) continues the Old Testament theme of God's faithfulness to Israel in recounting the famous last words of Israelite leader Joshua.

With great, rambunctious music, wacky characters and a clever story backdrop, Mission To Dendros is a winning children's album, and a fine addition to the ol' minivan playlist. 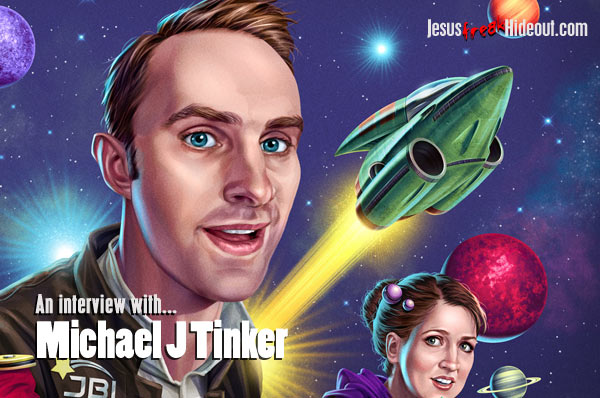 Michael J. Tinker: How long have we got?! The list is pretty long when it comes to influences! In fact I'm always encouraged chatting to other artists that they steal...I mean are influenced by so many others. But to give you a taste - musically it ranges from Django Reinhardt to Extreme, from the Beatles to Snarky Puppy, from Mark Knopfler to Paul Simon. I've always loved fantasy and sci-fi so grew up watching all the 80's classics, but also listening to radio drama. You'll hear a lot of that coming out on the new album! The minister that had the biggest influence on me was (is) my dad. He and my mum taught me the Bible from before I can remember. I always knew that whatever the issue I could go to them and I'd hear what God had to say on the subject.

Michael: I'm always encouraged by how much children can take in and understand. It's such a pleasure seeing God's Word embed deep in their hearts and the Holy Spirit drawing it out and changing lives. The other day my 10 year old daughter was worrying about her own sin and really struggling with it. My wife was comforting her, praying with her, listening to her. Then my 5 year old son comes in and whispers to his mum 'tell her - as far as the east is from the west...' It's a line from one of my songs (and the Psalms!) that he had taken in. The moment came when it applied and he wielded that sword with expertise that a lot of adults can't muster. What a moment!

Michael: I have the privilege in the UK of going into a lot of schools. And the questions the kids come out with are great. For a lot of them they know next to nothing about the Bible but they get right to the point. What is the stairway to heaven? (it comes up in 'Fortnight' apparently!) What is Pentecost? What's your favorite story in the Bible? Do good people go to heaven? All of these questions lead us straight back to Jesus, grace and the gospel. It's great seeing them process what they've picked up elsewhere and wanting to know what the Bible says.

Michael: Yes - 3 children aged 10, 8 and 5. Favorite thing about being a parent? Seeing them grow and leading them to Jesus. I'm far from the perfect parent, but that gives us more opportunity to celebrate God's grace, forgiveness and goodness together. They have a massive input into my music. Most of my music comes out of discipleship moments with my children. I find music is the best way to embed truth into little hearts. It sits there until the moment when it can be applied and we can say 'you know that bit of the song? That's about this...' Sometimes there isn't a song for the particular thing we're dealing with, so that's when I get writing. Hence I've written songs about worry, identity, loss, death and more. The kids also sing on the albums. The two older ones have both performed solos, and my eldest features on 'But God' (she's doing the haunting harmonies). And they all get to make silly noises on 'Pigs in the Mud' (which is another song about worry!)

Michael: I'm still figuring that out! On one level art is an outworking of life. It's part of the cultivating that God commanded Adam and Eve, and us to do. It's an expression of what it is to be created in the image of the creator God - we create! Art is a way of taking what has been made and reforming it, shaping it and re-presenting it. It helps us understand our struggles and joys in ways that perhaps mere words cannot. So in that way there's not a balance to be struck - it's all part of the same experience of life. In terms of a career in the arts, that's another matter. Being out on the road is tough. You miss moments in your kids life that you won't get back. It's tough on Jo, my wife. We've made the decision not to tour extensively for that reason. One of the joys of the kids growing up though is that I can sometimes take them with me. It's fun taking a road trip and having some one-to-one time. Our youngest is desperate to join in! The older ones are warning him that it's not all fun, games and happy meals though! There's work to be done. A big challenge in the modern age is the seismic shift in the way people consume music. Albums cost the same to make as they did 20 years ago, but people expect them to be cheap. Spotify and the like really don't help the matter. On the plus side crowd funding is great. It allows fans to really be a part of a project and own it. So that's an encouragement.

Michael: I'm a big believer in children growing into truth. I want to give them the biblical toolkit so that when difficulties hit in life, tucked deep away in their subconscious are kernels of truth that are just what they need. I'm so conscious of how confusing it must be growing up in today's world. So many 'options' for identity. So I want to keep pointing children to the safety of being in Christ, showing them that they are created with purpose and meaning and that they are loved. They don't need to search for an identity, they don't need to make a name for themselves - God has a new name for them already. So in my music I want to be honest with them. I want to teach the big bible themes of course, but I also want to get down to the nitty gritty. I want to show them that we all struggle, but that God is with us. I want to be honest that we're all broken, but God promises to fix us. I want to be honest that we can feel lost and alone, but that Christ is with us in those moments. I want to keep pointing them back to him so that in any situation they will know that he is good.

Michael: Oh wow - the thought of that day! To think that my music may lead some to Christ is all I can ask. I'd love to find out that something that someone heard from one of my songs as a child stayed with them throughout their life and perhaps it wasn't until much later that they truly understood. But at that moment they put their trust fully in Jesus. What a thought!

Michael: I've had the privilege of getting to know Andrew Peterson both personally and in his music. I love the depth of his theology - it's solid stuff! And I love how honest he is about the reality of struggle. And he's no different in 'real' life. It's something I want to do in my music and life. To be an humble-honest-Jesus-follower!

Michael: question, but is there an answer? Honestly I don't know. Some ideas come from listening to a sermon or reading a book and the Bible and thinking 'that line - I've got to use that in a song!' Other times I may be chatting with my kids and something I or they say just encapsulates an idea I want to share with others. I write it down and come back to it later. On the other hand a tune may come first. Often (annoyingly) when I'm driving or in the shower! I'll be humming something and whip out my phone (when it's safe/dry) to record it. Sometimes it goes on to become a song. More often it goes in the trash! And still other times an idea will just appear. I think the key is keep soaking up what's around. Live with your eyes and ears open and see how you can catch that moment and make it shareable with others.

Michael: The million dollar question! I'm increasingly convinced that we need to be putting out high-quality videos. The principle way that people access music these days is through youtube. So I'd love to have more animations and live-action music videos. I can normally only afford one per album, but I've got plenty of ideas for more. And then if the budget really was unlimited I'd turn our 7-part audio drama into a mini-TV series!