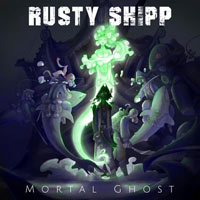 Nautical rock 'n' roll band Rusty Shipp completely intrigued me with their single "Sinking Scarabs" last year and have gone on to thoroughly impress me with their full-length album, Mortal Ghost. A band that blends classic surf rock like the Beach Boys, the raw energy of Nirvana, and the musical stylings of groups like Thrice or Foo Fighters may seem like a novelty, but instead, the Nashville rockers pull it off by borrowing the best elements from each area. Their name is a play on the lead singer's name, Russ T. Shipp, and fits perfectly into the nautical themes the band uses.

"Sea Sentinels" kicks the album off with a rocking instrumental that gives you a solid taste of what Rusty Shipp has to offer from a musical perspective. "Treading Water" keeps the nautical theme going with some heavy reverb on the vocals. The song starts with vocals and bass guitar only, but at 32 seconds, those both drop out and are replaced by a guitar riff that would make Green Day proud. Finally, all of the instruments come together for a punk flavored song that's difficult not to love -- especially the surf-inspired guitars in the third verse. "Devil Jonah" continues the rocking with a slower and more deliberate riff. "Crack Baby" slows the pace a touch and introduces an acoustic guitar that battles back and forth with the distorted electric. The 6/8 time signature gives the song a nice feel and super catchy chorus. "SS Naronic" is an interesting track that tells the story of a shipwreck in 1893. The large steamship disappeared on February 11, 1893 and was never discovered, but the lyrics contain the words of a message in a bottle found outlining the ship's sinking on February 19, 1893. (Most believe the ship sunk due to striking an iceberg.) Shipp sings from the perspective of L. Winsel who wrote the bottled letter, "God, please tell me there is more than this; that this cold abyss is not the end. Tell me is it more than an accident or wanting to teach a lesson. Show me how it's all a part of the plan." The song's factual backstory, interesting viewpoint, and sweet guitar riff make it an album favorite. "Hotel Bible" closes the first half of the album with a song that explores the inner struggles of someone in a hotel room who turns to a hotel Bible. What starts as an attempt to prove God as a fake turns into the person giving their life to Christ. The storytelling, song layout, and instrumentation give it the feel of an epic.

"Song of Storms" opens the second half with an acoustic instrumental before moving into the fast-paced punk rock of "Caligynephobia" (the abnormal fear of beautiful women -- otherwise known as gynephobia or venustraphobia). The track has an old school sound and is a great punk rock jam. Next up, Rusty Shipp attempts a very dangerous task: covering a Beatles song. While there are some amazing Beatles' covers, such as Joe Cocker's version of "With a Little Help From My Friends," so many others fail miserably. Thankfully, Rusty Shipp goes after the song most fitting to their style: the white album's "Helter Skelter." The track is arguably the most raw and rocking song in the entire Beatles' discography and Rusty Shipp pulls it off beautifully. The song ends with Shipp screaming Paul's iconic "I've got blisters on me fingers" before coming back in for a very different type of reprise than found on the white album. "Tip of My Tongue" changes things up with a track more reminiscent of an early Foo Fighters song, but the vibe still works within the context of the album. "The Lighthouse," an acoustic tune that is the tamest song on the album, brings the nautical theme back into focus and points to Jesus as the lighthouse. The album closes with one of the band's older songs in "Davy Jones" (formerly "Davy Jones Ain't Got Nothing on Me"). The song has been re-recorded and re-worked a bit with a new intro and a better overall sound. I've been jamming to this song for a while now, and this newly recorded version steps up the sound and production, but the familiar line, "My God holds the keys to death and Hades; Davy Jones ain't got nothing on me" is still a cool comparison to our Savior with the legend of Davy Jones and his locker at sea.

I had a feeling Rusty Shipp had some serious potential after hearing "Sinking Scarabs" and the Hold Fast to Hope EP, but they really knocked it out of the park with their full-length record. The three-piece band's name may reference a sunken ship, but there is a pretty nice treasure within. Russ T. Shipp's voice may not be for everyone, but the throwback to a vocalist like Kurt Cobain is clearly evident. While I was honestly hoping for a little more of the surf rock sound in the album, Mortal Ghost is still a stellar venture and has Rusty Shipp releasing an independent rock record that is very likely to end up in my Top 10 albums this year. Don't get bogged down in the same ol', same ol' being pushed on the radio and give these guys a shot instead.