With the spring season upon us, serious easy listening music feels so appropriate for the rains of April. Beginning this season off on the right foot, Kristen Gilles, from the worship band Sojourn, brings her latest release, Parker's Mercy Brigade. Few albums match so well with the season in which they are released, as this is a whole album filled with grief, sorrow, joy, and rest.

The album is carried some with very transparent and honest songs, like "Chase Away My Unbelief," "Bless the Lord Who Gives and Takes," and "Even the Darkness is Light to You." They are blatantly worshipful but have a lamenting overtone as the worship collides with grief. Lines like, "Teach me how to doubt no more, to know You're found by those who seek, and my emotions can deceive; chase away my unbelief," and, "Lord, You gave and You took, somehow for our good. Our eyes burn with tears but they turn to You," can leave listeners with a heavy yet hopeful heart.

Some very energetic and praising songs are "Spirit of Freedom" and "Praise the Sending God." While listeners may be hit with very deep and painful lyrics with other tracks, these songs are of adoration. It's actually really nice to know that these songs begin and end the album. It's a very smart and biblical approach to the album - beginning and concluding with the goodness of God.

Truth be told, from start to finish there is this underlying hurt; it can be felt as Gilles sings and at points her voice seems to break. If the album title and cover art don't give it away, Kristen and her husband Bobby Gilles wrote this album after suffering the still-birth of their son Parker. With that knowledge, it does change the perspective of the music and really gives more understanding with the themes of the album. It's an album of trusting in God's sovereignty - even when it goes beyond any difficulty that can be imagined. Bravo, Mrs. Gilles; you're pointing people to Jesus in the midst of suffering and doing so with very good music.

Buy It: iTunes Buy It: AmazonMP3 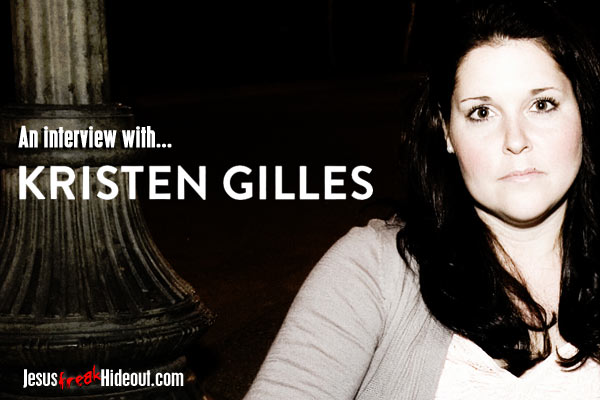 Kristen: Thank you for this tremendous encouragement! My husband Bobby and I were inspired to write these songs after our firstborn son Parker was stillborn on October 21, 2012, after a 10-month flawless pregnancy. His heart simply stopped beating toward the end of my labor and the doctors were unable to revive him after delivering him by emergency c-section. God was at work throughout our pregnancy, encouraging our faith, instructing us by His Word and preparing us to worship Him at all times, including in the face of the shocking deep loss and anguish we would experience at Parker's stillbirth.

God immediately began comforting us with His presence in the hospital through our family and the members of our church who rallied to weep with us in the moments following Parker's death. God even gave Bobby some lyrics while we were in the hospital (described in detail below). More lyrics and melodies came as we mourned in community with our families and church family, and with a host of others from around the world who learned of our suffering and responded with prayers and expressions of encouragement and comfort.

The Lord gave us the blessing of those who mourn: we were comforted, and these songs were a primary means of God's comfort. As we wrote these songs, we knew they were for us, but not only for us, and our hearts grew with desire to produce and share them with others who might be encouraged to trust and praise the God of All Comfort.

Kristen: Traditionally, my husband Bobby has been the lyricist and I've been the composer, but the process for this album was less "assembly line" and more like a rowboat, where we're both in it, rowing together. So we each had a hand in lyrics and music, although I still composed a greater portion of the music and Bobby penned the majority of the lyrics.

We just poured out our hearts to God in some of the songs, like "Chase Away My Unbelief" and "Bless The Lord Who Gives And Takes." With some of the others, the songs came more slowly, as we responded to what God was teaching and showing us, and how He was comforting us through His Church and His Word (songs like "You Answer" and "No More Fear").

Finally, God just dropped some of the songs right in our lap. The chorus to "God Of All Comfort" came to Bobby the night Parker was born. After holding Parker for hours, and shortly after giving his body to the nurse, Bobby felt God saying, "Your son is safe with me," and saying that He is working all around the world on behalf of children, through His church. Then Bobby started humming the lines, "You lead the motherless to a mother's kiss; You lead the fatherless to a father's embrace."

Kristen: "Spirit of Freedom" was the song we worked on the most, both lyrically and melodically. We were stretched in the process of shrinking the lines to be more singable but without losing their tenacious message. I should mention that our friend Jonatan Barahona co-produced this record with Bobby, and wrote two of the songs with us ("Awesome Is Your Power" and "Praise The Sending God"). Jonatan was our band leader and he worked out all the arrangements. His arrangements added so much to all these songs, and the band did a great job of bringing them to life.

Kristen: We wrote these songs to help believers express their sorrow, grief, doubts and pain to God. And ultimately, these songs point to the hope of Christ's resurrection, the strength and comfort of our Father, and the workings of the Spirit in His church today. We've already heard from lots of people at our church Sojourn, especially women, who have cried and also celebrated along with these songs, as they learn to "bless the Lord who gives and takes."

Kristen: My parents were my primary musical inspirations while I grew up under their leadership on the worship team at my church. They also wrote lots of songs; my mom primarily put melodies to Scripture and my dad wrote many original lyrics and melodies based on the Scriptures. I listened to and learned a lot of Integrity worship music while serving with my parents, and since then I've enjoyed being exposed to a host of other great songwriters and artists through the influence of my husband. I probably listen to more music now because of being married to a guy who loves to listen to a wide variety!

Bobby listens to a lot of contemporary worship music, both from indie artists and churches and from major label artists. But his writing is also greatly inspired by Dylan and Springsteen, as well as by southern gospel and country music.

You might not be able to hear much of those influences sonically, but they are definitely present in the lyrics. Listen to "Spirit Of Freedom" and you'll hear Springsteen and Dylan. From southern gospel, he gets the focus on heaven, resurrection and being together with Jesus and our friends and loved ones. And from country music, he gets the lyrical intensity, and that personal, full range of emotions. Country music records are often full of every kind of song from painful laments to rowdy celebrations, just like Parker's Mercy Brigade.

Kristen: In the last 17 months since we buried our son, God has been growing our faith in ways we never anticipated. He's been constantly teaching us that He can be trusted, that He should always be praised and that we have nothing to fear. God has also been teaching me that I have all I need in Him. He is all I need and He is all I have.

That sounds a little cliché but, really, it IS enough that I have been created, known, loved, forgiven, adopted and redeemed by God, and that I am always being carried by Him. It IS enough that God is for me and that He is working everything together for my good. HE IS ENOUGH and I know that all of my longings find their fulfillment in Him. The Lord is teaching my soul to continually be at rest because He has been good to me (Psalm 116:7).

And just last week, the Lord was helping me understand that I am not (and no one else is) entitled to any explanations from Him about anything, really. He doesn't owe us explanations when we suffer. It is enough that He is God and Lord over all. So we can and should trust Him even when we have no explanations for why we suffer and no knowledge of how long we must endure suffering. We can trust Him because He is faithful in all He says and does.

Kristen: I would probably be Golden Grahams, just because they were my favorite cereal when I was a little girl (and really, they're still quite delicious!). The special toy surprise would be a kite. I'm not sure how they'd pack a kite in there, but I love kites and flying them makes me lift my eyes to the heavens. I'm reminded of God's transcendence and His nearness all at once. And I'm encouraged to praise Him for what He's promised-our imperishable inheritance kept safe for us in Heaven where Christ is seated at the right hand of the Father and is ever interceding for us . . . so, yes, it would have to be a kite! :)