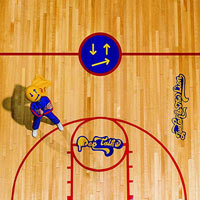 
Nashville's Judah & The Lion have some serious momentum going, with two well-received albums and a number one song on the charts ("Take It All Back 2.0"). But as with so many things in life, the outward show of success can sometimes mask the whirlwind that's happening behind the scenes. Navigating a successful album and touring to reach a growing fan base can be stressful in even the best of times. But it's clear in Pep Talks that not all is calm in main songwriter Judah Aker's life. Some of the best follow-up albums in rock and roll (the Counting Crows' Recovering The Satellites, Nirvana's In Utero) have been about dealing with the aftermath of fame and sudden notoriety. Add to this natural sense of disequilibrium extreme family dysfunction, and you have the recipe for an anguishing look at life through a confused and exhausted set of eyes. In Pep Talks, Akers spins tales of his parent's marriage falling apart while he and his band are touring the world.

Starting off with a the "mostly" instrumental title track (which the band describes as a "We Will Rock You" style chant that their fans can participate in as the band takes the stage), the album launches into the rollicking "Quarter Life Crisis." Over a stomping bass drum and and manic banjo, lead singer Judah Akers spins a tale of personal turmoil and an existential crisis that many his age will no doubt relate to. The repeated refrain of "I need a pep talk" is wonderfully placed against a prayer for guidance in a time of massive personal struggle. It's one of the best songs of the year.

The following song, "Why Did You Run," relates a devastating phone call of a parent from jail (due to a drinking and driving arrest) just before going onstage to play a show, and the confusion of how to handle such a situation when you are just "the middle kid," and the other parent is not answering their phone.

Continuing this storyline, "i'm ok." cheekily answers the oft-asked question of "how are you" in a two-part song that answers both the cliched "I'm fine" and the the more honest answer of "I'm not okay" (complete with download of information that qualifies as "too much"). Then, the gut-wrenching "pictures" (a slow-burn duet with new Country Music royalty Kacey Musgraves) moves to the aftermath of a divorce when one partner is taking the family pictures off the walls and grieving.

Lest you think there is a quick resolution to the situation (there rarely is when a long term, family relationship falls apart), the rocking "Over My Head" pops up to remind us that when it comes to seeing your parents divorce "It's all out of my control." Akers finds himself in a pattern of self-medicating the pain and confusion away ("I medicate, caffeinate, repeat"). [Spoiler alert: this age-old way of dealing with problems always leads to new and different problems.]

Alas, the back half of Pep Talks veers into goofball territory with intentional cheesy song titles like the all-caps "JOYBOYS," the intentionally misspelled "Sportz," and the unfortunately titled "Alright (Frick It)". (The exception here is the hopeful wrap up "Family/Best Is Yet To Come"). There was a need for some lightness after the heavy, thematic first half of the album, but the onslaught of goofiness is slightly grating when compared to the earnestness of the heavy first half of the album. It seems to be an intentional choice the band made, but as an artistic decision, it misses the mark.

Also, it bears saying that as a band that started out as a worship band, there is virtually no mention of spiritual life at all here, and how faith relates to the pain that life brings. The band seems to have missed a golden opportunity to speak some real hope into the world. The diagnosis is here, but the cure is nowhere to be found.

But Pep Talks has its grand moments, and some of the finest individual songs of the year. Taken as a mixtape, it would succeed in being a great summer album, but as a cohesive whole, it fall a bit short. But here's wishing Judah Akers and his bandmates a measure of peace from above in troubled times.