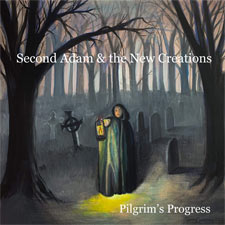 
Second Adam & the New Creations, a project started for a church ministry and fronted by Abram Germano, is finally releasing their full-length follow-up to 2015's EP Able to Enable. Pilgrim's Progress takes notes from late 00's early 2010's bands like MyEpic. The influences are evident, but this album feels like its own thing and not just a carbon copy of another band. Germano has done a great job of crafting these songs and putting them together. Not only are the songs enjoyable from a musical perspective, but the lyrics also carry a theological depth and meaning to them. At this point (mid-November 2022), Germano has already released four singles from the album and plans to release more after the holidays.

Pilgrim's Progress opens with the lead single "Let Sinner's Fly" -- which was praised by Jesus Freak Hideout earlier this year. The thick guitar driven chorus gives way to the sound of rain falling as "A Sinner's Lament" prepares to start. The track starts with full band, but has a really nice moment in the first verse where everything drops out but the vocals and guitar. There is a lot of reverb happening here and the feel is perfect as a drum fill brings the rest of the instruments back into the mix. The track doesn't have the same punch as the opener, but is just as impactful in other ways. The moody feel of "Sovereign Grace" follows in strong minor tones. The song slowly pushes forward in an almost monotonous and sludgy way, but the simple guitar lead line cuts through and adds a certain life to things. It's a great sounding song. The title track goes for a softer approach and backs away from the thicker distorted guitar tones. This one is acoustic oriented and sounds quite a bit different from anything prior.

"Kiss the Son" ramps things back up significantly. The guitars sound brighter here and the message is uplifting. In this rocker Germano sings, "My help comes from above where I'm seated in Christ. A heavenly dwelling and with eternal life. On His throne my King is reigning amidst His enemies. Orchestrating all things by His divine decree." From there the chorus kicks in, "Death has no sting; Jesus has won the victory. He has overcome." "A Devil's Agent" moves back to an acoustic fronted number, but this time more upbeat than "Pilgrim's Progress," -- with more pop influence -- but relatively short, only making it just over a minute in length. "Deliver Me" is another rock song, but blends the acoustic and overdriven electric guitars more so than anywhere else on the album; it's a good sound. Things wind down with "Cool and the Flame." Germano goes back to an acoustic guitar (with some piano accents) for the closer finally ending with, "We are the same; feelings of joy and pain through our days. One God's true desire is to go with us through the fire and give us our hearts desire."

Pilgrim's Progress is a great listen from front to back -- especially if you're a fan of someone like MyEpic. The thick distorted guitars throughout sound fantastic and the acoustic fronted songs interspersed break it up nicely without giving you an overdose of one singular sound. Outside of the wonderful music, the lyrics are also quite enjoyable. Mixed with deeper theological references and simple to understand Biblical truths, the lyrics stand strong next to the musical backdrop. You can tell Pilgrim's Progress was a labor of love and a long time coming. This is a phenomenal indie record that can easily stand with some of its bigger named peers. This one is worth a listen or two for rock fans wanting a deeper lyrical experience.