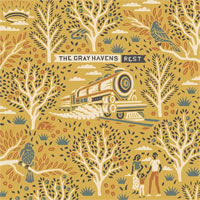 
Whimsical pop/folk duo The Gray Havens is back with new original music after nearly two full years of remixes and covers that have held their growing fan base over in the interim. Inspired by a Bible Project video on the sabbath, principle songwriter Dave Radford set out to write songs around that central theme. The result is three new tracks and three instrumentals on an EP titled Rest. In-demand producer Ben Shive returns to help steer the ship, with his fingerprints notably all over the vocals of the record.

Sunday Train has the most pep of the three tracks, making it a great choice as the lead track, though it suffers in comparison to the two songs to come. By no stretch is it a bad song--in fact its pleasant--it simply comes and goes without much memorability. Conversely, Magic in the Moment is a standout with its gentle and sweet reminder to not trade the small moments with those you love for the glow of your cell phone. It features (presumably) background talking from their child, making the intent of the song obvious as David sings with a tinge of regret in his voice, All of these moments/I have missed/All this time/Ive wasted it/But if theres magic to find still up ahead/I want all of it. Musically, its a bit one-note in the same way of Willy Wonkas Pure Imagination, and I think thats a deliberate nod to a song the group covered previously.

Next comes the title track and thesis of the short EP, Rest. Though the song is simple, its the haunting background vocals that float around above the strong drumbeat giving the song an interesting contrast. The lyrics are sparse but powerful, asking questions that should give us all pause in 2020 like, Why is it so hard/So hard/To slow it down? Of course the answer comes a bit later in the tune and rightly refocuses listeners on the finished work of Christ stating, Give me eyes/Help me see and believe Your Son/Give me Faith/let me rest in the work Hes done/Cuz the work is done. Interestingly, David is nearly rapping the verses, and at the very least, using a spoken word cadence that live performances of previous song High Enough may have emboldened him to try. He nails it pretty convincingly, and its a nice nuance to add to his musical repertoire.

Overall, the album falls between touching (Magic in the Moment), brilliantly executed (Rest), and middle-of-the-road (Sunday Train), making it a classic mixed bag. The other two things of note are one big positive--the terrific album art provided by Joshua Noom--and one head-scratcher--the perplexing inclusion of instrumental versions of each of the three songs, respectively. The instrumentals dont seem to serve a purpose and act as more of a detractor from the originals, especially Magic in the Moment, revealing in a glaring way how little is going on musically in the track.

However, all things considered, it's always nice to have new original music from The Gray Havens, and this reviewer for one is hoping this is the creative spark that keeps the train rolling toward more new music. Until then, download and add the first two tracks to your 2020 playlists and enjoy the reminder to utilize the biblical practice of sabbath in your weekly routine.