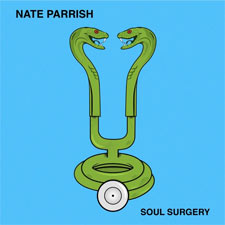 If you were told that a member of Kutless had a solo project, you probably wouldnt expect a brash, fast-paced punk rock sound. But, with Nate Parrish, thats exactly what you get. And it was well-received, as his 2020 album, Im A Wreck, garnered near-universal praise; needless to say, anticipation was high for the inevitable sophomore release--and I do believe those expectations were met.

...Or maybe exceeded, because with each consecutive listen, I find myself enjoying Soul Surgery more and more. On a musical level, its most similar to the punk stylings of MxPx, with high energy and touches of skate punk. But then were also treated to moments that are more akin to Social Distortion, like Life In Dissonance and Bullets and Blades, the latter of which also makes use of some really nice, jazzy saxophone. Theres also some rock balladry in the penultimate track, In the Storm, which also features Thomas Freckleton of Silent Planet fame. While its an enjoyable track, and it isnt necessarily a soft one, it is in the heavier moments that the album really comes alive. Parrishs amelodic, gravelly voice is better served when the music is amped up, allowing him to be forceful and even provide some well-timed screams. For instance, the intensity of Religion of Relevance makes for one of my favorite moments on the album, as he says Theres no salvation in your religion of relevance / I have no faith in you, and I will not repent, and then full-on screams that second line a few more times for emphasis. Its an infectious sound that almost demands repeat listens.

For me, when I listen to something new, the music itself is usually the first thing I fully register, while the lyrics generally take a few listens to start clicking. While that was also the case for Soul Surgery, Im glad I took the time to soak up the lyrics, because thats where Parrish really shines here. As in-your-face as the music can be, the lyrics are even more so, as he pulls no punches in his criticisms and rebukings. For instance, Attention Junkies takes shots at societys need for fame and fortune. With everyone needing a podcast or their own TikTok channel, Parrish says We crave fame, inject it in our veins / to numb the pain of living mundane lives / to chase that high, we live a lie ... famous in a fantasy / withdrawn from reality / weve become attention junkies now / and we need to get clean. The aforementioned Religion of Relevance screams in the face of our cultures selfism, which is further explored in Death By Self Preservation, which outlines the dangers of giving over control of your life to those in charge (the anti-socialism message is pretty clear).

Whats great, though, is that Parrish doesnt spend the entire time pointing the finger without also calling himself out. The songs are well-balanced between judging evil and admitting his own flaws. Jaded is a great example, and one that all Christians can identify with, as we struggle in our imperfection to follow Christ with everything: Ive become an atheist that, when in need, believes You exist / a dogmatic dose, religious fix / I take you in like western medicine / a doctors note, a prescription ... I never meant to be so jaded. And, of course, in case you think the whole album is just about weighty issues, there are songs like Nostalgia. Its not exactly an entirely happy song, reminding the older generation of punk rockers that our golden years are likely behind us, but it does feel nice to just get lost in daydreaming sometimes: I found another reason to go looking back / new opportunity for a relapse / cause this worlds ablaze / I just want to escape / I need another fix of reminiscing yesterday / Im addicted to the innocence of my youth / before I knew that people could be monsters too / nostalgia is my favorite drug / makes the way it is feel like the way it was.

In all honesty, Soul Surgery did not exactly connect with me on the first listen. I enjoyed it well enough at a surface level, though, enough to think that there was something hiding under that surface that I could really latch onto. Thankfully, repeat listens really brought out those hidden gems, and its become one of my favorite rock releases of the year so far. If youre interested in listening to Soul Surgery, take the time to give it a few listens and really invest in it. You may end up with more than youd bargained for.