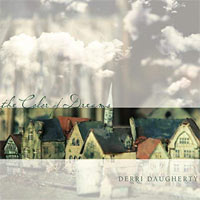 Derri Daugherty
The Color Of Dreams


Would that we all were so productive. The Choir, the classic alternative band who have been going strong since the early 1980's, have been going especially strong this year. The band released Bloodshot, their new album, earlier this summer (which cracked the top 20 in the iTunes alternative albums sales rankings) and also gave us both a remastered version of their classic, early 90's Kissers & Killers album, as well a full acoustic reworking of it.

And now, as if all that activity was not enough, lead singer Derri Daugherty has given us The Color Of Dreams, his latest solo album. And though Daugherty's unmistakable voice (and Choir drummer Steve Hindalong's drumming) give the album a Choir feel, much of the material (particularly in the lyrics) has a distinct bent that separates it from Daugherty's main gig.

What does match, however, is the melancholy feel that The Choir has been known for these many decades, and have doubled down on this year. The opening title track begins with a mournful violin, and spins a sad tale of romantic loss in which Daugherty laments "the fragrance of her on the sheets / the taste of lips I'll never kiss again / her winter feet / the sound of laughter I'll never hear again." Whether the song is referencing the death of a love, or a divorce, it's a harrowing and haunting beginning.

Thankfully, things lighten up with "Unhypnotized," a rocking ode to shaking off the lethargy that so often creeps up in life. (It's a theme that the middle-aged me is starting to relate to more and more.) The track swings with a great drumbeat from fellow Choir man Steve Hindalong and a great lead guitar that lifts the mood of the album.

Third track, "Your Chair," is an album highlight, and a great ode to Daugherty's father, who passed during the writing of the album. As a tribute, to his "tool belt wearing, preacher man" of a father, the song is a beautiful recounting of a life well-spent defending the weak (in WWII) and preaching the word. When Daugherty sings "there never was a son who loved his father more than I loved you," the sentiment is well-placed against the backdrop of sad, chiming guitars. The song is a textbook case of how to write a tribute without being cloying or over-the-top.

The rest of the album serves a list of things that Daugherty seems to have wanted to write about (the biographical "Between Nashville And L.A.," the sad "Saying Goodbye," a recounting of a relationship that has ended). The loping "So Are You To Me" ends the pop-song portion of the album with an extended violin and guitar drone that fits the overall mood of the album. The record ends with a series of instrumental, ambient songs that Daugherty favors (his other solo releases were an album of ambient music, titled Clouds Echo In Blue and Hush Sorrow, an album made specifically for fans). While these tunes are pleasant, they make the album, as a whole, feel sort of lopsided. If they had been interspersed between the ten beginning songs, it would have made for a coherent and compelling whole.

The Color Of Dreams is a worthy outing by Daugherty, and a must-have for any Choir fan. This has been quite a year for the band, and here's hoping that there are many more ahead, and that the sun breaks through the clouds a bit for Derri and the guys.