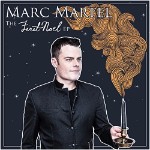 
Last year, Downhere/Queen vocalist (that may never not be odd) Marc Martel released his first Christmas outing, The Silent Night EP. Though the songs were mostly given the standard treatment, with little experimentation outside of the updated Downhere original "How Many Kings," the EP was solid and enjoyable to listen to. For the second year in a row, Martel and his heavenly pipes are coming together to release some more holiday spirit. The First Noel EP features six more Christmas or Christmas-esque songs for our enjoyment.

The EP starts with perhaps the most appropriate song imaginable. Most people say that the day after Thanksgiving is when you can officially listen to Christmas music (I say they're just catching up). So for those who wait until Black Friday for their Christmas music, you can get started with "It's Beginning To Look A Lot Like Christmas." An upbeat, slightly jazzy tune, Martel brought along the vocal talents of current tourmate Plumb, who adds another level of cheer to the tune. The cheeriness doesn't last too long, as Martel follows with the classic track "Mary Did You Know?" To add some intrigue to this version, Martel brought along another guest, but this time the guest happens to have co-written the song. Buddy Greene brings his southern gospel charm to the second verse of a song that hypothetically asks Mary if she truly knows who her Son is. The Bible does describe a conversation with Mary and Gabriel, but it's unclear exactly how much he told her about Jesus.

The near epic feel of "Mary Did You Know?" transitions into the warmth of "The Christmas Song," which, once again, enlists the help of a legendary musician. Martel provides all the vocals this time, but the bass, including a quiet bass solo in the middle of the track, is provided by Scott Mulvahill, the bass player of Ricky Skaggs' bluegrass band, Kentucky Thunder. It's certainly one of the more enjoyable versions of the song that I've heard. Martel's version of "The First Noel" follows, which doesn't deviate too much from most renditions in existence, and thus doesn't really stand out. Of course, it doesn't help when the beautiful "Ave Maria" follows it. Despite the lyrics of "Ave Maria" being composed of the Catholic "Hail Mary" in Latin, the piece is timeless and gorgeous, and Martel's take on the song does it justice. The final track is another timeless piece, "The Hallelujah Chorus" from the 1741 oratorio, Handel's Messiah. In a semi-recent Facebook live video, Martel talked a little about how he recorded this piece, using layers and layers of vocals, and utilizing auto-tune and voice modulation to hit some of the high notes that are a bit out of his register. The end result sounds great and ends the EP on an exciting note.

This tradition (is two years a tradition) of Marc Martel aiding in the ushering in of the Christmas season via Christmas carols is one I'm happy with. If you liked last year's Silent Night EP, you will greatly enjoy The First Noel. Get into the Christmas spirit!