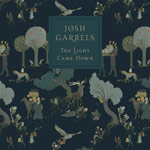 Josh Garrels
The Light Came Down

It's all too easy to be cynical about Christmas albums, and the commercialization of this "best-of-all-holidays" in general. A few days after the Halloween merchandise has been cleared out of the aisles of your local box store, the red tinsel and Christmas merchandise comes roaring in. In this tidal wave of "stuff" to celebrate the birth of Christ, are new, (mostly) hastily thrown together albums of holiday songs by your favorite artists. And these artists are most likely wearing a festive scarf or hat that seems ill-fitting, and singing the one millionth version of "Let It Snow." But every few years, a Christmas album comes along that forms a perfect connection between the heart of the Christmas story and a tapestry of unique artistic expression.

Josh Garrels' The Light Came Down is just that kind of album. Garrels, the folk troubadour (although he's so much more than that musically) from Portland, Oregon, weaves the Christmas narrative through a bevy of medieval songs and sounds, giving the story a new light, and breathing fresh air into what qualifies as "Christmas Music."

The title track ebbs first on a bed of rich, natural instrumentation (there are lots of lutes and other string instruments featured throughout) and choral voices before Garrels' distinct voice enters the scene singing, "there is a light / a new day dawning / all things are passed / all things are made new / prophets have spoken / of all that He would accomplish." These arresting words set the tone for the album, and in the choice of instrumentation, you can almost feel the cold night air of Bethlehem.

"What Child Is This" comes next, and this familiar carol fits the Middle Ages vibe of the album. Garrels does little to alter this timeless melody, but the slow, meditative treatment of the song casts a new light on the lyrics and connects this ancient song to the overall theme of the album.

"The Virgin Mary Had One Son" is an old folk song made famous in the 60's by folk artists like Joan Baez and Bob Dylan, and casts Jesus as the counter culture force he would become. Garrels cranks up the volume here, with a pulsating bass line and a fine, ragged guitar solo.

After another meditative and ancient treatment of the Benedictine tune "O Come O Come Emanuel," "Gloria" explodes as the album's best moment. Against a funky upright bass line and a repeated piano motif, Garrels sings, "Tonight the stories told / ancient but never old / of when the Savior came / all the angels sang / peace on earth good will to men / a child has been born / and all of us are suffering / beneath the weight of death and sin / in hope of new life / all our hopes made good in Christ." As the instrumentation builds, a horn section and choir burst in, giving the song a rush of celebratory adrenaline that lifts the mood of the album from meditative to joyful.

Thing get a little too weird, perhaps, with "The Boar's Head," an obscure traditional English carol that is still sung in a few places in the Western world. The half Latin, half English lyrics are capably handled by Garrels, and if anything, the song reinforces the Medieval motif of the album (a motif that starts with the Middle Ages artwork of the album cover). The jaunty instrumental, "Merriment," conjures up scenes of a village feast, while the other instrumental here, "Journey To Bethlehem," sparks thoughts of that long ride taken by Christ's parents.

In "May You Find A Light," Garrels wraps up the narrative with a prayer for the "lost and weary traveler," wishing the seeker well, and for all of mankind "to find the light to guide us The Light Came Down." "O Day Of Peace" continues this prayer, seeking a time when "The swords of hate fall from our hands / our hearts from envy find release / till by God's grace our warring world / shall see Christ's promised reign of peace." These beautiful words are needed in our divided world, but more than words, Garrels hits on the truth that true peace is only possible in the person who came down as a child that first Christmas night long ago.

Josh Garrels is no longer Christian music's best kept secret. As of the writing of this review, this album is number four on the overall iTunes album chart, showing that Garrels is making headway in the music world without the help of a record company or industry apparatus of any kind. And The Light Came Down is a deserving album of this wide audience, and one of the most creative, epic and beautiful Christmas albums you will hear in many years.