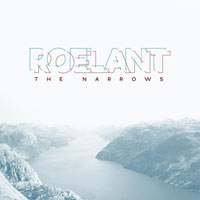 
It's been four years since Roelant released its debut album, Music To Change The World By. That's a long time to wait, especially after releasing a pretty strong debut album. But in that time, the band has refocused its energy into some new material that displays a terrific amount of growth and a variety of musical influence. The result is an impressive five-song EP that takes the band to a new level.

The Narrows takes all the best parts of Roelant's debut and tosses out any filler. In a shorter track length, you get the best of what they do and not much to complain about. The opening track, "Angry," is a rock track in the vein of Muse. The song's title is a dead giveaway of its message, as Justin Roelant goes on the offensive against the hypocrisy of the Church in America. He blasts the lukewarmness and the misguided ideals, singing, "So swear allegiance, I'll take my creed, the bride's let the Church, she sleeps with the beast, a children's crusade, the messenger lost the path, when the smoke clears away, you'll still salute the flag." It's sure to ruffle a few feathers, but it's on point and relevant. "Control" switches gears quite a bit, without a jarring effect, slowing down and hitting the listener with a smooth, groovy, 80s-inspired pop sound and much more cryptic lyrics. Justin's Kevin Max-like vocals become more apparent here, which is rather appropriate, as the song sounds like it could've come from Max's AWOL album. "Control" is an easy album highlight, for sure.

The band changes things up yet again with "Wrong," and this time it is a bit of an odd choice. On its own, the song is solid and would make a terrific radio single, but the subtle pop/country undertones don't necessarily fit well with the rest of the songs. Don't count it out, though, because it's a fun jam that deserves some attention. "Confessor" is another highlight that takes its cue from bands like Keane and U2. It's a slower song, but the chorus is loud and anthemic, with Justin's soaring vocals sounding great. Though the song is a bit convicting for folks who care more about being right than loving each other, Justin also uses it as a confession that he struggles with it, too. "Narrows" brings out the band's 90s alternative sound in another highlight track, and it leaves the listener with some wisdom that it borrows from the previous track: love is more important than knowing it all. I love the line, "We've built our truth on prohibition, perform the rites and you can pass, but how can we navigate the narrows, when we're building the ship without the mast?"

While I certainly enjoyed Roelant's debut album, I wasn't prepared for how good The Narrows is. The band has really stepped it up this time around, and I highly recommend giving them a listen. They're diverse, talented, and have an important message to spread. The Narrows is available now wherever you get music, so take some time to dive into it.