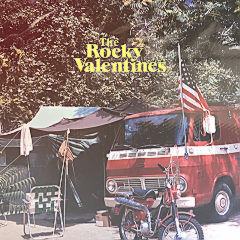 
Boy, the Martin family sure is talented. Brothers Ronnie and Jason have been releasing music together and independently for close to 40 years now, almost as if it's just coded in their DNA. This theory is further supported by Jason's son, Charlie Martin. After spending some time on the drums for Starflyer 59, Charlie took it upon himself to start writing his own music, which he's recently released to the world courtesy of Velvet Blue Music.

Performing under the name The Rocky Valentines, Charlie has clearly spent time under the learning tree of his father, with shoegazy alternative music that sounds like several different eras of Starflyer. Interestingly enough, he almost sounds more like Ronnie, vocally, with a much higher pitch in his carefree voice. The upbeat "Off and On" leads the pack, with a driving rhythm and a catchy chorus that begs to be put on repeat. "Driving Blind" follows suit, but also features an irresistible punk-inspired sound, with steady riffs and a faster pace. But it's the slower, more introspective "Shooting With One Eye" that really captures the heart and soul of the project. Again, taking some cues from more recent Starflyer material, Charlie's pensive lyricism begins to reflect on the past, when things were easier, more fun, and more innocent. Lines like "Sixth grade, staying up too late / downing green Gatorade / always eating too much food / this was my youth" are simple, but effectively take me back to my younger days gulping Surge and schooling friends in Goldeneye and San Francisco Rush. As a sucker for nostalgia, I'm easily entrapped by this song.

Charlie mentions in closing track "Microphone" that he never really expected music to become something of his own, despite growing up surrounded by it. But The Rocky Valentines is evidence that not only is it a reality now, but he's also good at it. The vocals may not be everyone's cup of tea, and the lyricism is indicative of a fledgling songwriter. But based on this first, short entry in his discography, I have high hopes for future releases. If you've got 13 minutes, give it a listen, and maybe consider grabbing a CD or cassette.