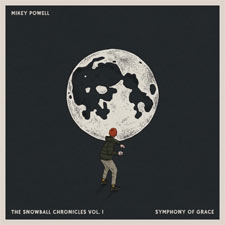 
Mikey Powell is a singer/songwriter and worship leader from the UK. Powell writes what he likes to call "existential comedy pop" as his songs run the gamut of worship to songs about stepping on a Lego brick. His newest EP, The Snowball Chronicles, Vol. 1: Symphony of Grace, recently released and is now available. The EP gets the first part of its title from the opening track, "Snowballs," and the second part from the third track, "Miracle Mercy" -- singing, "We have heard the symphony of grace; how merciful the melody of love that made a way." The six tracks are divided into slower acoustic based numbers ("Is There Anything Too Hard For You" and "In You") and upbeat pop tunes ("Thank You," "Miracle Mercy," and "You Never Break Your Promises"), with "Snowballs" sort of bridging the gap of the two sides. The overwhelming majority of the new EP features mostly straightforward and worshipful lyrics. For example, Powell sings, "Thank you, thank you, Lord. You forgive and You restore. Thank you, thank you, Lord. For you remember our sin no more," on "Thank You." These songs are fun, cheerful, and uplifting.

However, I think the strongest songwriting comes in the opener. It's a fun song musically, but it's so clever lyrically. Some highlights are: "We have climbed metaphor's mountain; we've mined the caves of creativity," "We have tried to sum You up; tried to squeeze in our tiny poetry, but our words they fall so short. All our eloquence and all our liturgy." In the chorus, Powell points out the ineffectiveness of it all when he sings, "It's a bit like lobbing snowballs at the moon; futility and fancy words wrapped in a catchy tune." Finally, my personal favorite line comes in the final verse: "How can we summarize the infinite and still make sure the whole thing rhymes?" It's a great commentary on just how difficult (and impossible) it is to truly sum up an omnipotent and all-powerful God into a three-and-a-half minute song.

If you're looking for an enjoyable pop album filled with fun music, solid instrumentation, and Christ-centered lyrics, The Snowball Chronicles, Vol. 1 is for you. If you want something more astute, or perhaps a little more insightful, it can also scratch that itch as well. I find myself struggling to decide if I enjoy Mikey Powell's pop side or his acoustic side more, but either way I've determined that they are both good choices. This new EP is worth checking out for a multitude of reasons and Vol. 2 would be a welcomed addition. 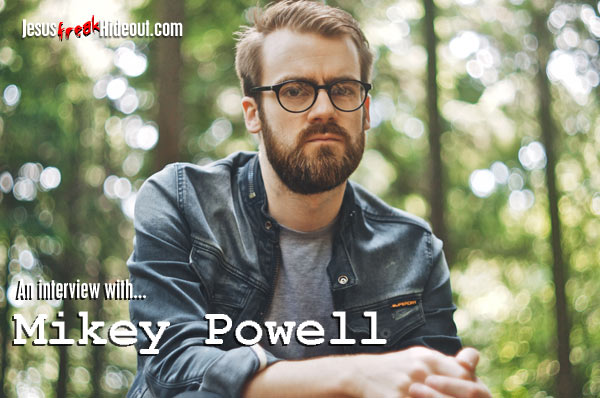 Mikey Powell: I often feel that with the two different sides. I like to hold them both in tension, as I think they're both equally valid.

So I grew up listening to bands like Delirious and U2 that had profound influence on me as a teenager. So that kind of anthemic pop/rock that you can recognise in worship music. But as I got a bit older and went to University, I discovered the music of Sting - Ten Summoner's Tales is one of my favourite albums. And artists and songwriters like John Mayer, as well as the creativity of early Gungor too. I also played guitar for a gospel choir for a while, which opened me up to a whole new world of harmony and rhythm. Lately, I've really been enjoying some more electro indie-pop vibes, with a bit of 80s nostalgia. I loved what Paramore did with their latest album. So, yeah - pretty broad I'd say!

Mikey: Worship and leading worship has always been a passion of mine, and it always will be part of what I will do. I wrote worship songs before I wrote anything else (there weren't very good to start with, mind!) And I was very aware that I hadn't released a whole collection of worship music - which had always been a goal of mine. So at the moment, that's what I feel like I should be focusing on, really! But I'll never rule out a silly song at some point. I've had one brewing for a while about the cold side of the pillow!

Mikey: So with "Snowballs," the song and the whole concept for the album is directly inspired by a quote from Jeff Lucas in his book with Adrian Plass, Seriously Funny 2. It says 'trying to describe God is a bit like lobbing snowballs up at the moon. The best we can do is get them about 20 feet on their way. Which is paltry considering the moon is about a quarter of a million miles away'. As soon as I read it, the idea just grabbed me. I loved the playful nature of it, but also the serious reminder that we cannot contain God in our songs, our words or our ideas. And that there is always more to discover. We must never think we've understood everything.

So I put together this little ditty. Most of it came quite easily. I wrote the chorus first on my ukulele, and then the verses based on this double bass riff, and mashed them together. It was the finishing touches that took longer - the ends of each verses wouldn't quite stick for a long time! But I let them mull over in the background of my mind for a few months and eventually they came together!

Mikey: This is an interesting one. Very much a different process from "Snowballs." It started in a time of personal worship - just me and my guitar. And that phrase - is there anything too hard for you - was what I was singing around. Again, the chorus came quite easily, and I had some ideas for verses that I'd written down in a note previously. But I could never quite feel happy with it. It didn't feel like it flew as well as it could. So I sent it to a friend, hoping he might say 'no it's fine mate!' But he actually suggested I go away and re-write it basically!

I was really reluctant to go back to the drawing board, but one night while I was lying in bed, I had the idea for the chorus - so I had to get up quickly and record a quiet voice memo, so I didn't forget it (or wake my wife)! And that is basically the chorus today. I repurposed the bridge as the verse, and then added the simple bridge that's there now. Broadly what I wanted to express is this idea that God is powerful enough to turn situations around - that those miracles are in the big, bold and miraculrous, and the small, slow everyday changed lives. But ultimately, he makes all things new. And there's a great deal of hope in that.

Mikey: So, I work with an incredible producer friend of mine called Joe. He's basically a genius. I just took the songs and some ideas to him, with some reference tracks and he just puts it all together! One of those guys who can play everything. And he's so good at that layered approach - lots of simple parts interlocking together. And I love that. So most of the instruments are him. And then the arrangements are a mix of what I had brought and suggested and how he worked with that as a canvas. I got some friends involved in various wind instruments on a few tracks. And I even play clarinet myself on Is There Anything Too Hard For You. As well as guitar and ukulele on the others!

Mikey: A good question! It's certainly been a tumultuous time! I've also got married during this period as well, which will change a person's perspective on life. I think God has been teaching me a lot about the importance of the small, everyday things in life. Just learning to recognise His voice and His presence in the midsts of those. The loud, exciting moments of encounter are great, and they have their place. But to learn to meet with God in the mundane, in the day-to-day. To pay attention in those moments - that's what builds a lifetime journey with Him, I believe.