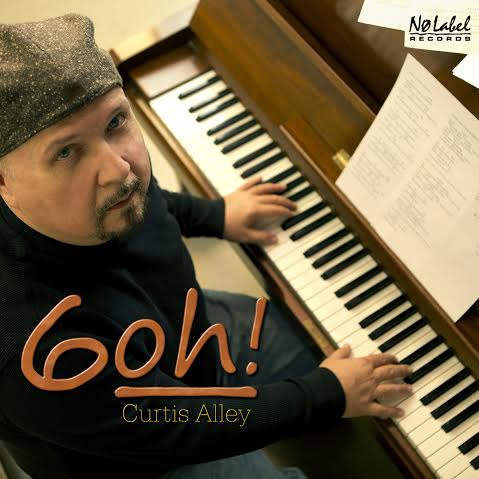 A music fan since early childhood - and a musician for almost as long - Curtis Alley has an extensive discography under his belt. In 2015, the artist celebrated his 60th birthday; in honor of the milestone, Alley put together a collection of songs he'd written over the years for his newest album, 6oh!. Instead of a traditional album that contains songs that are all written somewhat at the same time, the songs on 6oh! were written at various times over the past forty years. The first half of the track list was originally written by Alley between 1978 and 1987; you can really tell that these are older songs, as well. The Keith Green influence is very evident in "I'm Not Worthy," and shades of classic rock & roll from the era (Captain and Tennille, maybe a little of The Doobie Brothers) show up, too. On the latter half of the album, with the exception of "Here I Am," written in 2000, the songs were written within the last four years. The songs are a bit more modern, but Alley's influence from the past still carries with him in everything he does, so the rock & roll charm is still present. The thing that's carried with him that's the most refreshing, though, is his love for the Lord. He humbles himself to magnify the greatness of God in "I'm Not Worthy," then follows it up with a rendition of Psalm 47, which calls out for God's people to sing praises to Him. "Let Us Shout Out" is a straightforward praise & worship song that probably makes its way into his Sunday morning worship services on a regular basis. Regardless of genre, Jesus is the focal point of each and every song. Music fans who grew up on the likes of Keith Green and Randy Stonehill may appreciate Curtis Alley's music, but for fans of modern pop and rock, the sounds of 6oh! may be considered an acquired taste. Regardless, check it out and see what you think. - Review date: 4/16/16, written by Scott Fryberger of Jesusfreakhideout.com