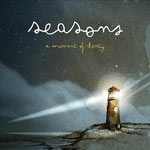 Seasons
A Moment of Clarity

Only a year old, Australian rock band Seasons have worked really hard to write original music and build their fanbase. Sam Young and Pete Wright started with just their instruments, but soon realized they needed a vocalist to accompany their music. Their lineup became complete when they were joined by singer Hayley Jensen, who was no stranger to the music scene (she had a solo album to her name and had come in 4th place on Australian Idol). This year, they've released their first official album together, a five-song EP called A Moment of Clarity. To put it simply, Seasons is a rock band. Not rock in the vain of Red or Nickelback; rather, it's more well-done, along the lines of Anberlin. Throw in a little Paramore influence, and you have a fair description of Seasons: Anberlin meets Paramore. So, on the one hand, you have some good guitar riffs and an overall good sense of musicianship; on the other hand, we have something of a borrowed sound, with not a lot of Seasons' own distinct sound. To be fair, Hayley Jensen doesn't sound completely identical to Paramore's Hayley Williams, but they're not too far off from each other either. Songs like "The Road" and "Little Girl" have driving guitars and basslines, but it's just so difficult to listen to the songs and not hear other bands' guitar lines, drum fills and vocal melodies. Seasons is a good band, and they're talented, but very unoriginal. If they dug a little deeper and showed us who they really are musically (which I really feel like they can do, even without leaving the pop punk genre), they could definitely make a name for themselves in a fairly big way. If you like the Anberlin/Paramore sound, you should check out A Moment of Clarity, but I'm going to hold out and see if they can produce something stronger in the future.