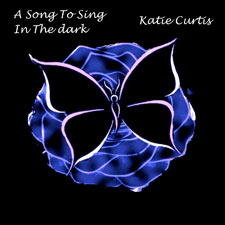 Katie Curtis
A Song To Sing In The Dark


Katie Curtis is an independent singer/songwriter who released her debut album, A Song to Sing in the Dark, in 2020. Katie is a walking, talking (and singing) miracle. The singer was born with a form of muscular dystrophy and wasn't expected to live past age five. At eight, she developed epilepsy. Through all of this, her mother prayed and God brought her through. At fourteen, she got a guitar and started her musical journey. She currently is a songwriter for other artists while also writing and recording her own material.

The music of A Song to Sing in the Dark is rock flavored and features some nice guitar licks throughout. The sound ranges from overdriven guitars, to acoustic driven songs (which is a good chunk of the album), to an impressive acapella number. "How Great Thou Art" is the most unique track on the album and features just two vocal tracks of Katie singing the main melody and a single harmony part to the classic hymn. This track highlights her vocal prowess. Lyrically, the album is a mix of more direct spiritual moments, pure honesty, and some others with a more generalized approach. In "Stay," Katie sings, "Broken love; I give You my broken love. Broken praise; I sing You my broken praise. And I'm a mess, my God, but I hear You say; You say, stay."

A Song to Sing in the Dark offers up some inspiring moments and lyrics, as well as some nice musical moments. Katie Curtis' personal story just adds to all of that, and she gives all the credit to the Savior by saying, "I never thought I would be doing what I wanted to be doing, but God found a way." If you're looking for some new acoustic based music with some rock and roll flare, Katie Curtis' album may be exactly what you're looking for. A Song to Sing in the Dark would be worth your time and attention.
- Review date: 1/21/22, written by Michael Weaver of Jesusfreakhideout.com 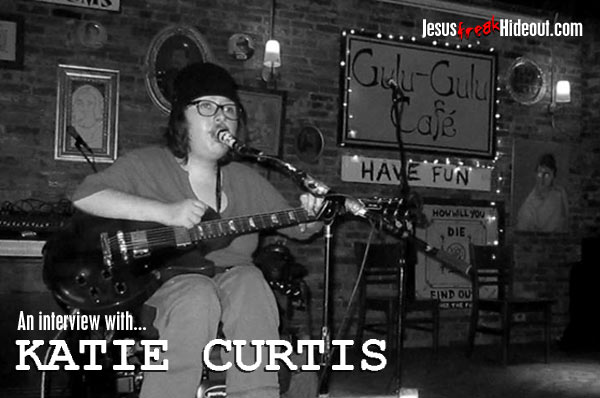 Katie Curtis: God deserves the credit for what I say "we've" accomplished. That's how I think about it. It's been about learning to surrender. People write songs for different reasons, but for me, it's often a way to process what's going on in my life or in the world. I say it's about surrender because the whole album came to be because I let Him lead. "Autumn Hero" was meant to be a single, but then I wrote "Heart of Love" probably in ten minutes, really by His inspiration. That was the catalyst. I wrote "Victory" after going through a hard time, spiritually, and as I was coming out of it, or somehow "seeing the light at the end of the tunnel," I told the Lord that I just wanted to write something that was kind of a "thank you," but was also about His Victory in general. Literally every song on the album has a story like that. When every song was finished, I just told Him I'd keep writing for Him, but it was really Him who was going to have to get it heard. I don't attribute any success to chance. He's made it happen.

Katie: My music is really a collaboration. I write the melody and lyrics, but the music is all done by my friend, Ken, who owns the studio we record at. When we start a new song, I usually tell him the general mood or style I'm looking for, and he plays until we figure out what works for the song. Because of that, I feel like we're a little all over the place sometimes. As a teenager, I listened to a lot of pop-punk and ska, but I also listened to the Beatles and Pearl Jam. I was subject to a ton of country and bluegrass as a kid until I grew to like it, so I pull from those styles as well.

Katie: A Song To Sing In The Dark comes from a line in my intro song, "Nothing Else:" "This is a song to sing in the dark, this is enough, a spark to start a fire, this is a prayer You answer with love, 'cause You are God, and You are with us." There was something bad in the news at the time I wrote it--I don't remember what--and I just wanted to know that everything was going to be okay. I wrote the song because I eventually did get a real reassuring feeling from the Lord. It wasn't necessarily that everything was going to be okay, but that He really was with me, and that was enough. While none of the songs are specifically about it, I think the album as a whole is about finding that spark.

Katie: I wrote all the songs and did all the vocals, except a friend of mine sang harmony on "Nothing Else," and lead on "How Great Thou Art." She has a lower register than I do, so it made sense for that one because I didn't want the harmony to have to be through the roof. I played the ukulele on "Heart of Love," and "Just An Honest Prayer." I also played the two electric guitar parts on "Rest." Ken did all the other work, though. I can play guitar, but I have to play upside-down because I can't turn my hands completely over. That limits what I can do, so it just makes more sense for him to do most of the work.

Katie: I absolutely love "How Great Thou Art." I chose record an acapella version because it's beautiful all by itself, and I think something stripped bare like that really is a song to sing in the dark--something to strengthen you when you're really being stretched. You don't need anything else.

Katie: I wrote "Symphony" after a strange kind of prayer. I had been talking to the Lord about how Creation has its own kind of percussion. I spent quite a while just thinking about "Creation's drums," because you don't necessarily notice it, but it's everywhere: rain falling, thunder, earthquakes. Then I thought about the other kinds of natural "music" in the world and the song developed from there. Ken and I pray before every session at the studio, and I often remember to simply thank God for the gift of music. He's the first composer, which I think is pretty cool, as a musician.

Katie: I'm wary of performing because of my break-through seizures. They don't happen that often, but they still make me nervous. I very recently joined my church's worship band, so I'll be helping at our Sunday services and other events. Initially, I sent the music team my song "Innocence," which is part of an upcoming project, in the hope that they might consider using it. I was invited to help them arrange a version that would work for our church, and ultimately just joined the band.