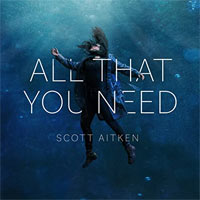 Scott Aitken
All That You Need


When you hear that a musician's career started because his brother brought home a guitar he fished out of the trash as independent artist Scott Aitken's did, you cannot help but be intrigued. Though he was born and raised in South Florida and started on drums and piano first due to his dad's influence, Scott seized his dumpster-dive treasure and went to work carving out a musical career. Aitken sought further skills at Full Sail University, where he also met his friend and roommate Emmanuel Stephen and formed a band called Leap of Faith. Later, after graduating and Leap of Faith disbanded, he owned his own recording studio from 2010-2014, released an album in 2015, and moved from Florida to Nashville, Tennessee. Self-identifying his musical leanings as alternative/indie rock, I find that on this particular release, titled All That You Need, that Aitken skews more pop/worship with country music influences. This is undoubtedly due to his being based out of Nashville--the main stomping grounds of both the Christian and Country genres. Overall, while the production is crisp and clean, the vocals pleasant, and the musical palate is slightly broader than most CCM, All That You Need struggles to stand out from the crowded field vying for attention. Perhaps pushing further into the country influence, and digging just a bit deeper past some lyrical and musical clichés would do the trick, but that's not to say there aren't a few tracks worth your attention. Alternative indie rock may have better described his previous releases, like his 2015 album Wide Awake, but to be fair, there is a good amount of eclectic genres represented (including a guest rap feature from Nico Santana in song "Miracles"), even if this effort seems to be aimed more at the fanbase of the most recent Chris Tomlin, Josh Baldwin, We The Kingdom, and The Afters' albums. This one is for fans of the aforementioned artists and other radio-ready pop/worship, with the songs "Miracles," "Do Ya," "Where I Am," and "Bad Math," the first to check out as the cream-of-the-crop.
- Review date: 8/15/20, written by Josh Balogh of Jesusfreakhideout.com