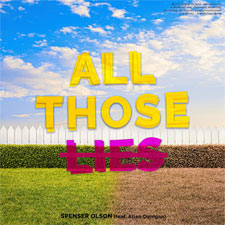 Beginning his singing ministry in 2013, pop artist Spenser Olson has spent this last decade writing music to glorify the name of Jesus, with numerous singles and a full-length worship album to his name. Now he's jumpstarted 2023 with a brand new single called "All Those Lies." The lowkey R&B beat and Spanish guitar licks are extremely reminiscent of turn-of-the-century boy bands (which is a nice, nostalgic throwback to what some would consider the glory days of pop), while also blending in a little modern production. Olson's vocals mesh well with the style, though it almost sounds here like he's holding back. Walking the line between singing and rapping, he doesn't take any opportunities to put his full voice on display. The guest vocalist Allen Corrigan is a little less subdued, but I think a little more power from each singer may have elevated the track to a higher level, especially in the hook, where Olson confronts someone trying to attack his character and steal his worth. That being said, though the lyrics are a bit vague, they're also encouraging, reminding the listener that God's love for us is stronger than the lies anyone else can tell about us ("Hopeless and broken, that's what they'll tell me / helpless, unspoken, no you can't control me  I'm covered by His love / stop spreading all those lies"). While there are certainly some areas of improvement to be found, overall, "All Those Lies" is an enjoyable track from a talented artist. If this is your first experience with Spenser Olson and you like what you hear, be sure to check out his back catalog, because there's plenty more to discover.
- Review date: 1/10/23, written by Scott Fryberger of Jesusfreakhideout.com