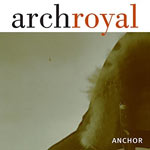 Archroyal is an indie folk outfit from Minneapolis bringing sounds familiar to those who are fans of artists like Josh Garrels or Bon Iver. Their debut EP, Anchors, has a lyrical focus on the gospel of Jesus Christ and has a soft acoustic singer/songwriter feel expected from a lot of folk music. While the height of folk music in America hit in the 60's and into the 70's, the genre has been making a strong come back in the 2010's -- and in several different forms. Archroyal has a very minimalistic approach to the music and most songs feature only an acoustic guitar and vocals, though some percussion instruments are used, such as in "Work the Land" or the tambourine in "Onboard," and there is a lightly overdriven electric guitar found playing a lead, fittingly, in "Distortion." The guitars sound pretty throughout, and the reverb used adds some nice depth. Each song has positive merits, but the best songs are found in "Onboard," Distortion," and "Solid Rock." "Onboard" features a worshipful section in which the lyrics, "All glory be to You" are repeated as the music builds; "Distortion" is noteworthy more for the music as some mild feedback leads into the tastefully executed overdriven guitar that complements the ending of the song; and, finally, "Solid Rock" offers a unique rendition of the classic hymn. With "Solid Rock," the hymn gets a makeover with a familiar, yet slightly different, rhythm, with voice inflection that really makes the song standout. The biggest area of complaint--so to speak--with Anchors is likely the vocals. The vocals are in no way bad, but much like Garrels, they may be an acquired taste for some. However, if you're into that somewhat quirky vocal style, you may find yourself absolutely in love. Archroyal is an interesting venture, offering up authentic feeling folk music. The message is inspired and Christ-centered, and while the music is simplistic, it's still quite enjoyable. If you're looking for a new place to get your folk music fix, Archroyal's Anchors EP just may be the prescription you're looking for. - Review date: 4/4/17, written by Michael Weaver of Jesusfreakhideout.com