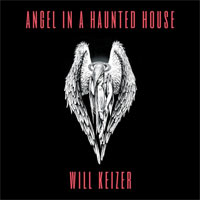 Will Keizer
Angel in a Haunted House


With a wide range of influences, ranging from Bruce Cockburn to Elvis to The Killers, singer/songwriter Will Keizer has come out of the woodwork with his first new album since 2016's Pictures in the Dark. Released in March 2020, Angel in a Haunted House is much more suited for Halloween, with its darkly jaunty tunes and overall eerie feeling. Though it's not necessarily scary or horror-themed, the music largely feels like you're walking through a dark forest on your way to who-knows-where. The album is largely instrumental, with some tracks coming and going without making too much of an impression, and some tracks (like "March of the Fallen") really standing out with some impressive guitar work. Though the instrumentation is generally solid, the songs with lyrics are much-appreciated. The lyrics to "Did A Bad Thing" really remind me of Queen's "Bohemian Rhapsody" ("Oh no, I did a bad thing / and now they're coming for me / there's nowhere to hide / oh mama, I did a bad thing"), and "Don't Go in the Woods" borrows from the story of Little Red Riding Hood (while also amazingly sounding a lot like Starflyer 59 in the process). But "Waltzing With The Dead" contains the strongest use of lyrics and vocals. The "la di da di da" hook is pretty catchy, and the verses are a bit depressing, but very fitting for the album as a whole ("All my dreams are lying in their graves / not a one of them could be saved / so I'm digging up the bones, I'm not living; instead / I'm here waltzing with the dead"). With Halloween approaching, it's the perfect time to give Angel in a Haunted House a listen. And I'd also recommend heading over to his Bandcamp page to get a little more background on the album's concept.
- Review date: 9/10/21, written by Scott Fryberger of Jesusfreakhideout.com