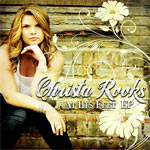 Christa Rooks
At His Feet EP

Christa Rooks is a singer/songwriter and worship leader at her home church in Covington, Georgia. In an effort to further her ministry with her husband, Rooks took to recording worship songs, which lead to a recording partnership with Jason Hoard (known for his work with According To John and Third Day). Rooks' first EP, At His Feet, is a contemporary pop release, mixing two Rooks originals and three borrowed songs. The EP starts with the three covers; "Carry Your Name," as made famous by Christy Nockels, leads the pack. Rooks' rendition is a near mirror-image of the Nockels song, complete with tempo, instrumentation, and almost identical vocals. The overplayed "Hosanna" by Hillsong follows, and again, Rooks does little, if anything, to change up the song at all. Her own touch on the song would've made this a more enjoyable listen. Another Hillsong song, "None But Jesus," follows, to which Rooks puts some almost folky acoustic guitar. After the average cover song choices, we finally get a taste of Rooks' own writing, starting with "Most High Renown." The lyrics, though reverent and glorifying, are reminiscent of random worship songs from over the years put to music similar to the late 90s/early 00s Christian pop singer Paige. The same can be said for "I Worship You Lord," which is also penned by Rooks. With a chorus like "Jesus Son of God, teach me Your ways, make me more like You, as I live all my days, let my life worship You in everything I do, I love You," it's easy to see that there's a general lack of creativity, and a great deal of rehashing lyrics to create something "new." I like the piano in "I Worship You Lord" and some of the light folk flavor of "Most High Renown," not to mention Rooks has a good voice, especially for the genre she's in, but I'd love to hear more originality in the lyrics. During intimate, personal times of worship - where it's just you and God - songs like these are perfect if it's really what you're feeling toward God at the moment and it's what's on your heart. However, for an album or EP, there should be more. Christa Rooks has not delivered that with At His Feet, but given that this is her first release of any kind (and if she continues to work with Jason Hoard), I think the potential for greatness is certainly there. - Review date: 11/16/12, written by Scott Fryberger of Jesusfreakhideout.com