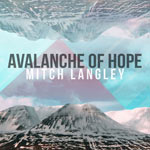 Mitch Langley is a worship leader at Northland Christian Church in Topeka, Kansas, but like many worship leaders today, he's also an active recording artist. With two releases in 2015, Langley isn't slowing down, with a new five-song EP to end the 2016 calendar year as well. The Avalanche of Hope EP is Langley doing what he does best: writing catchy pop rock songs to glorify God's magnificence and His great love for us. Langley shows he is no stranger to the anthemic worship tune; his latest single, "Once For All" (which has even caught the attention of Centricity Music) is a declaration of the victory we have in Jesus' death and resurrection ("Hallelujah, love has won, through Your death we've overcome, Jesus, risen King, You're alive, we are free, once for all our sin is gone"). If this song hits the radio, it has great potential to be extremely popular, not only for its sound, but for its relevant message as well. "Nothing In This World" is slightly musically reminiscent of more recent Hillsong United and Lovelite (more the former), while the closing track, "Boundless Mercy," features perhaps the strongest music of the entire EP. A quiet, hopeful guitar leads us into a soft, pop rock track with beautiful synth and what sounds like a very quiet, minimally-utilized horn in the background of the hook. If you're going to listen to only one of these songs, you might consider making it "Boundless Mercy." Mitch Langley is a talented musician with no shortage of affection for our Savior or ways to express it. Fans of contemporary worship artists like Matt Redman and Housefires will be very pleased with Avalanche of Hope. If you're not part of that group of people, but you need some encouragement, it still comes with a recommendation for you. - Review date: 12/31/16, written by Scott Fryberger of Jesusfreakhideout.com 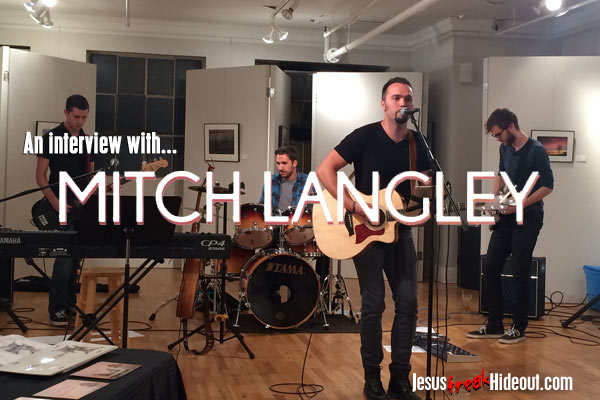 Mitch Langley: Haha! Well, I didn't even really plan on doing three records in the last two years! I think that it mostly falls in God's hands. As He gave me the songs, I felt led to record them! But the first record [of the three] was really close to being in 2014 and not 2015. I don't know what the future holds in regards to songwriting and recording. But I will continue to write for God's glory until He desires something else from me.

Mitch: Well, the musicians were, hands down, top notch guys and players. I was so humbled that they accepted the invite. They are all based out of Nashville, Tennessee, and my producer, Brian Hitt, was the key guy in getting this all to work together! They knocked out five songs of tracking in about a ten-hour day! Incredible!
Keys: Matt Gilder from Chris Tomlin's band.
Bass: Matthew Melton, also from Chris Tomlin's band.
Electric guitar: Chris LaCorte, who is currently touring with country star Dustin Lynch.
Drums: Ben Phillips, who has done tons of big CCM and country records, including records with Big Daddy Weave and Jeremy Camp.
I was very blessed to have them join Brian and I to produce this record. I was beyond blown away and I hope God will continue to use these songs for His glory!

Mitch: Now that is a good question! I would say the phrase came from a line in one of the songs. "Your love's a mighty tidal wave, oh God, Your grace an avalanche of hope, You're wonderful." I think the church, and the whole world, for that matter, needs God's grace to fill us and overwhelm our hearts. There is so much negativity and hate in this broken world. But, as believers in Christ, we can help it. The gift of grace is nothing to take lightly, and if we can open our eyes to how amazing and big it really is, we can bring more of it to this desparate world.

Mitch: I love a game of flag football playing quarterback or playing pick-up basketball and chucking up some three-pointers! I don't know if it would be called talent, per se, but it's a passion of mine!

Mitch: "Raise This Banner," simply to declare that Jesus Christ alone saves us from sin and gives us eternal life. There isn't a more meaningful thing to sing or talk about. Salvation is the most important decision any of us will make. I just want to be a small voice to proclaim that Jesus alone saves.

Mitch: I have been reading the Psalms and looking at how many different themes of trust, praise, glory, and honor are found in those books. It is really just a bunch of songs packed in together and I love how King David was a man after God's own heart. As a worship leader myself, my goal is to have that kind of passion and love for Jesus! Though David fell pretty hard during some of his reign, he was still accepted and loved by our great God. He wasn't defined by his successes or failures, but rather defined by a holy God who he put his trust in for salvation.

Mitch: I would love to see some of the songs get discovered through Song Discovery and other partnerships I have. I find a lot of joy in seeing churches and groups of believers singing these songs and discovering truth in them. I hope that the Gospel can be discovered and more people can be encouraged to know God and be saved!

Mitch: Without coffee, this record would have never been possible...joking!
I want to thank my wife, Kristi, for allowing me to do all these records. I love you, babe!