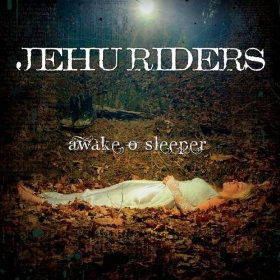 Jehu Riders are a young, three-piece hardcore band from Williamsburg, Virginia. Referring to their brand of music as "warship" (because their message is both worshipful and focused on spiritual warfare), they've recently released a six-track EP on their own that they call Awake O Sleeper. While the warfare aspects are mainly that of a spiritual nature, they use physical warfare as a metaphor. The militaristic metaphor gets going from the EP intro, "The Alarm," which features an awkward sort of marching music. The latter half is some static that leads into the title track. What you get with the rest of the album is a very muffled mix of hardcore music and rock vocals. Jehu Riders definitely has that good old-fashioned Spirit-filled hardcore sound at times, but the change-up in vocal style (that is, using mainly clean vocals) does give it a sound that isn't too often used these days. That's about where the originality ends, but at least there's a little bit of it. Between the vocals/lyrics and the music, the music is the stronger aspect. As bountiful as hardcore music is, it's not an easy style of music to play, and Jehu Riders does it well. The guitar riffs and double bass are like that of the seasoned hardcore veterans, and the occasional guitar solo, while not the most amazing, are played well and can only improve over time. Lyrically, the band falls a little short. While there is certainly an optimistic and encouraging message, believing in God to come and stand by our side as we battle the evil spiritual forces, I can't help but feel like it was watered down to sound like a hardcore music version of that message. It's especially bad in the EP's final track, "Plead Your Blood." The majority of the six-minute track is composed of the same lyrics over and over again: "I plead Your blood over my sins and the sins of my nation, God end abortion, send revival." A little more than halfway through, there's a breakdown, and a screaming of the lyrics "We prophesy life and plead the blood, I prophesy Your life, I plead the blood of Jesus Christ!" followed by a repetition of the word "Life!" It almost seems as if they just took some "Christianese" and threw it together without thinking about whether or not it made sense.

If Jehu Riders goes on to make another album, I would like to give it a listen. Musically, they're pretty talented, and I think they would fit in well on a label like Strike First or Blood & Ink. A little bit of work on the lyrics would do them a lot of good, as would making their finished product a little less muffled, but even as they are now, they could potentially gain some fans who follow those record labels.