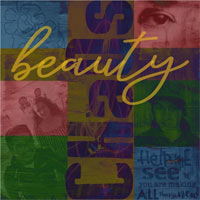 
Isaiah Blickenstaff is a singer/songwriter from Minnesota who loves the Lord and wants to prove it through song, as evidenced by his debut album, Beauty and Chaos. The album features ten contemporary/pop rock songs full of joy and worship that are as honest and heartfelt as they are enthusiastic. The songs are simply-written pieces without a lot of bells and whistles, but it's not for laziness or lack of caring - the songs just don't need anything extra to get their point across. And while the lyricism and mild underproduction are clear indicators that Blickenstaff is still an amateur songwriter, the potential for growth is also plain to see and hear. But all of that aside, it's wonderful to hear him using his talents and hearing his love for God pouring out of each song. This mostly manifests in the form of encouragement for brothers and sisters in Christ ("Be Still and Know," "No Matter"). Even the sadder sounding songs, like "Tears," end up pointing back to God in the end. Beauty and Chaos may not be an album for everyone, but it's certainly an uplifting album that can help comfort those feeling discouraged.
- Review date: 8/20/20, written by Scott Fryberger of Jesusfreakhideout.com

In his full-length debut, Isaiah Blickenstaff goes big with a thematic album dealing with the tension between God's love and the pain of the world. The first half of the album does most of the wrestling, while the latter half navigates how to live in a broken world. Lyrically, there is plenty of potential, though some nuance or subtlety could be woven in. Musically, it sounds like a throw-back to mid-90s CCM, which may turn off some while appealing to others. Blickenstaff's voice also isn't as strong, though to give him credit, he works his range and shows his potential. Overall, this is an album that shows potential without quite hitting it. The messages explored are worthwhile, and perhaps with future releases Blickenstaff's artistry will mature and fully tap that potential that's lurking just below the surface. - Review date: 9/2/20, John Underdown of Jesusfreakhideout.com