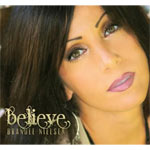 After struggling with boldness for her Savior, and subsequently falling into a load of addictions, pop rock artist Brandee Nielsen refound her faith in Christ and started on her latest album, Believe. Some of Believe consists of songs that Nielsen rewrote to give them a clearer spiritual message, such as the album's opener, "I'm Alive." Speaking from her past experiences, Nielsen has an easy time crafting encouraging lyrics that remind us that Jesus is alive ("Behold The Barren Cross") and that He always love us no matter what we've done or do ("Jesus Loves You"). "You Showed Me" is a pretty bare bones song about the struggles that she went through on her journey back to God's grace; Nielsen bares her soul, and I have nothing but respect for that. Lyrically speaking, the album is an encouragement to those struggling with some aspects of following Jesus. As far as its sound, there could be a great deal of improvements made. The album's overall style is like a slightly-modernized 90s pop/alternative. If you remember the Christian pop artist Paige, you can sort of get a feel for Believe, with a little more rock a la The Cranberries. Some of the 90s music wasn't even good in its own time, and it's even harder to make it sound good in this era of the music world. "The Truth" came as a bit of a surprise, as it picked up the rock vibe significantly, sounding more like Evanescence, and it actually works in Nielsen's favor. Though that sound is generally more dry than anything else, heavier rock music seems to work a lot better for Nielsen's vocals. With the softer, pop rock material, her voice sounds a lot louder than the music (which can be chalked up to the production), and it doesn't quite fit the music itself. Not having an extremely strong set of vocals, she may do well to do a bit more experimenting with heavier music, as a lot of rock bands today don't have classically good vocalists leading the way. If you're looking for top-notch pop rock music, this probably isn't for you, but if you're in need of some good encouragement, Brandee Nielsen's lyrics in Believe will be there to lift you up.