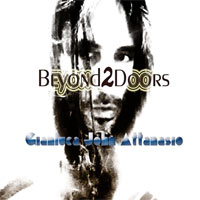 
When it comes to being a jack of all trades in the entertainment industry, it might be rather difficult to rival Gianluca John Attanasio. From writing and recording music and journalism to writing and directing films and plays, Attanasio seems to want to do it all. Along with having songs and other pieces released by major labels, he's also released solo material; his latest solo effort is the full-length album, Beyond 2 Doors. Much like he tosses his hat into different artistic endeavors, Beyond 2 Doors blends multiple genres. The opening track, "King Money," features a classic blues guitar riff as the backbone, some organ and saxophone, and Attanasio's bluesy, Italian-accented voice. He experiments with classic rock and psychedelic, with songs like "In the Club" and "Black Forest" borrowing from bands like The Doors and Grateful Dead, and he even throws in some electronic and vaguely-dance music in "Miss Dog (She Knows He Wanna Be Her Dog)." The lyrical themes of the album are also about as diverse as the genre, as songs jump around from sad and depressing to conceptual to satirical. Some songs are even provocative, dealing with sex and overindulgence ("In the Club," for instance). Unfortunately, there are also plenty of moments that might leave the listener with some confusion. The aforementioned "Miss Dog" bizarrely begins, "You can't give me a price / You can't give me a smile / 'Cause I am a bird bird bird bird of power / You can't give me a clock / You can't give me a play / 'Cause I am a bird bird bird bird in the the air / I have control of your nights and days / I have control of what you say / I'm the trigger of your desire / I am the honey." What's more is that "I Lost My Angel" is a bit on the concerning side: "Gliding on the freeway / Dogs are looking for a friend / Rain's washing every blame / Pure like children's tears / I lost my angel / She was my Heaven / I lost my Heaven and the best part of me / She was my Heaven / I kill my Heaven and the best part of me." I'm not sure if it's the language barrier that results in these moments of odd lyricism, but the album does have its fair share of them. Beyond 2 Doors may be a hard sell to most music fans, but it has its niche in the market, and there are surely potential fans out there waiting to stumble upon it.
- Review date: 8/13/20, written by Scott Fryberger of Jesusfreakhideout.com