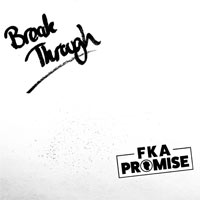 
FKA Promise is a multi-instrumentalist, singer/songwriter, producer and MC who, through Christ, overcame a life of pain and addiction. FKA Promise now devotes his life, and musical output, to testify to the goodness he has experienced since coming to know Jesus. Our very own Josh Balogh even gave him props as a top indie artist to watch out for last year. FKA Promise released a three-song EP in 2020, but is back with his new single, "Break Through." The new song starts out with FKA Promise talking about some issues in his past and later features a brief interlude that tells the story of the day a friend's life was changed. In a song about breaking through past struggles and coming to victory and the power of Christ, FKA Promise sings, "From the rising of the sun. To the horizon salvation has come -- and we pray. Form the rising of the sun. To the holy mountain -- the work's just begun." Musically, the song has a super chill vibe that borders on pop and club sounds. The steady "dance beat" keeps pumping in the background, but the intensity stays low to give it an overall mild, but enjoyable feel. The additional music (keys, pads, and guitar) also gives it a very atmospheric sound that just adds to the aesthetic. "Break Through" is a great story of turning from a life of drugs and trouble to finding peace and purpose in Jesus Christ. Fans of a worshipful pop sound will likely find a lot to like about FKA Promise and "Break Though." There's no denying the infectious nature of this song as it plays on repeat. I echo Mr. Balogh's sentiment on FKA Promise and look forward to what he does next.
- Review date: 4/23/21, written by Michael Weaver of Jesusfreakhideout.com 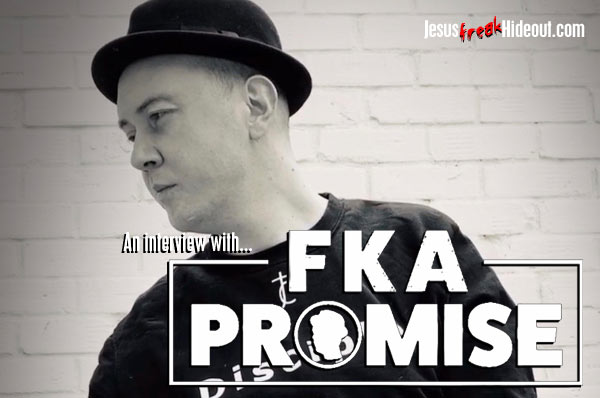 FKA Promise: Hey thanks! I guess it's a mixture of influences! My brain is a big melting pot! I listen to Young & Free a lot, and I love the way they use contemporary EDM/Pop in their songs. I guess the song was kinda building in my head over a few mornings. I wake up with pieces of songs running through my head sometimes, and I had been doing some production for emerging artists, like pop-stuff, and wanted to go for a chill-electro kinda vibe. So I think that influenced me too. I was into Trap around the time I got saved, and I think that maybe influenced the drop for the chorus.

FKA Promise: Yeah, well, as the song was coming together, I felt a real "darkness to light" thing happening. So I could hear someone talking about being lost over the beat and the pads. I asked my friend and worship-leader if he would mind recording his testimony and I chopped it up like a sample and cut it into the song. I got into crypto earlier this year and "to the moon" is like a real prevalent phrase haha! But I love it and it seemed o fit, ya know; "from the mountain, to the moon." I heard a pastor talking about Psalm 113:3 and I was like "this needs to go in my chorus" so that's where I got the lyrics to the chorus from. I guess most of my songs reflect my journey somehow.

FKA Promise: Ah. So, that's actually my friend's friend! If that makes sense? It's not my testimony, it's my friend's! As far as I know his faith was building for a while. He was coming to church for a while and then kinda sank back into the life again but then came back and got saved. But that's how these things usually work, they say "relapse is part of recovery", and God's love will always win in the end.

FKA Promise: So, I think my friend's story is from about 4 years ago... my own story is I was saved 6 years ago. Mine is a similar story to the sample in the song. Although I was never bullied at school, I was on a bad path for a long time. I think my heart always knew what I was doing was wrong. I got involved with crime and drugs from quite a young age. And over the years, it all spiralled out of control. Drinking had become a real problem for me. Drugs, too. I was homeless a few times and was close to suicide when Jesus rescued me.

FKA Promise: I think it's more electro and pad driven. I've learned a lot over the last year. I think I've gotten better at production. It's probably a little different stylistically, and my upcoming singles are probably more similar to the New Revival stuff.

FKA Promise: Yeah I've got 2 songs in the works that I will be releasing as singles over the next 6 months or so. "Always Near" is my take on a more Worship-type song. The other I don't have a title for yet, but that's more like the New Revival vibe! When they're out and released, I'll be dropping another EP featuring the 3 singles and 3 more songs, hopefully by Christmas or possible early 2022...

FKA Promise: Wow, I feel so so blessed. I mean, my day job has carried on and I've spent more time working from home, which has given me the chance to focus on my own music as well as supporting other emerging artists who are coming through right now. I'm just thankful that God has been my Rock throughout this. I think if I wasn't saved, I probably would've been fearful and scared of what has been going on around the world, but God has given me comfort and grace, and provision. I'm just so thankful. And prayerful, too, for the people who have suffered so much over the last year. I've had great support from my church, my worship team, my wife and my little boy. I'm very blessed and very thankful. And it's like King Jehoshaphat once said to God, "we don't know what to do, but our eyes are on You". We just need to keep Jesus as our focal point. He has overcome the world!