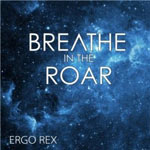 Ergo Rex
Breathe in the Roar

Rock trio ER released their debut album, The Risk of Tragedy, a couple of years ago, not too long after initially forming. Now, just over two years later, the boys are back with a new album, and a new name (or they possibly just revealed what ER stood for all along). Ergo Rex is back with their second full-length album, Breathe in the Roar. Ergo Rex opens up their album with a bit of an odd track, "Save the Freaks." It features a strange mixture of 80s anthemic metal and modern rock (like what you would have heard about a decade ago, such as Day of Fire). The chorus aims to make the listener dance, but the lyrics "Save the freaks, let the music move your feet" just don't seem appropriate for the edgier rock music (nor do the pre-chorus lyrics "There's a disco ball in the closet of your heart, take it out, dust it off, let it glow"). Despite the song's weaknesses, it does show us a good characteristic that you will find as you journey through Breathe in the Roar: an intentional mixture of different subgenres and eras of rock. Their desire to not be contained into one genre is admirable, and it works on several occasions. In addition to the metal/modern rock sounds, you'll also find Americana/rock & roll in "1979," mid-90s, acoustic-based alternative in "Lois Alonely," and piano balladry in "Judas and I." The album's catchiest track, and the highlight in addition, is the song "The Last Sad Song." It's interesting that it's the strongest track, given that it sounds like a rockier Jonas Brothers song (with a hint of influence from The Shins), but musically, it stands out more than the others. "1979" is a close second, with more of a Daniel Powter or Keane influenced pop rock feel. It feels like Ergo Rex held back a little in this song, but it shows you where they shine, and what style they should focus on more. They tend to do better with the poppier material than the heavier rock or alternative music. Ergo Rex does have a way with lyrics sometimes, such as in the chorus of "Judas and I." Though the song is perhaps the weakest, musically, I like the idea they present: "I guess I'm not what I thought I was, when the sunlight came, my kingdoms were dust, Judas and I fell with Adam, the garden's closed and we are lost." The following track, "Afterglow," paints a unique picture of God as He sometimes gives us what we need instead of what we're chasing, using Moses as an example: "Three thousand four hundred years ago, a man climbed a mountain to find the law, but he found God." Alternatively, it seems that the musically stronger songs have the weaker lyrics. Breathe in the Roar is evidence that Ergo Rex is capable of strong songwriting and strong musicianship, but it seems that, for the most part, the two never seem to meet up in the same song. I like where these guys have gone since The Risk of Tragedy, and it seems like they're still heading in a great direction. I'm eager to hear what's next to come for them. Check out Breathe in the Roar if you want some unique rock music with lots of different influences. - Review date: 3/23/13, written by Scott Fryberger of Jesusfreakhideout.com