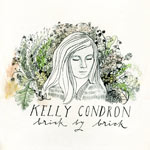 A blossoming artist from Joliet, Illinois, singer/songwriter Kelly Condron found herself being personally complimented by Nick DePartee of rock band Kutless at a festival they both played. With such encouragement, Condron felt enabled to continue using her music to reach out to people. Fast forward to September of this year, and fans are treated to her second outing, an EP entitled Brick By Brick. The five songs on this EP all vary in sound; interestingly, the album is almost palindromic in its genre approach. Starting with a gospel sound in "Blessings Flowing Over" (think Alabama Shakes meets Selah), Condron then moves on to a light, acoustic pop sound - akin to Jason Mraz or Colbie Caillat - and then to a piano ballad in the middle. The bubbly acoustic pop sound returns in "Brick By Brick," then closes with another gospel track in "Among the Dead." Musically, Brick By Brick is solid, particularly the poppy sounds of "Impossible To Know" and "Brick By Brick." However, Condron's vocal doesn't always mesh well with the music here. Though she does sing some higher notes, she seems to work more in a lower register. I wonder if a rock sound or something heavier than her current offerings would be a better match for her vocal strengths. Regardless, Kelly Condron is a talented artist who can only get better at what she does, and who will continue using her music to minister to any hearts that God brings her way. - Review date: 12/13/16, written by Scott Fryberger of Jesusfreakhideout.com