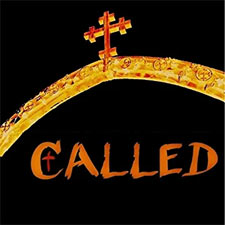 CALLED is not only an indie pop/rock band based in Stuart, Florida, but also an active ministry offering music-guided retreats, praise and worship events, and regular musical concerts. Each of these options blend music, theology, and prayer together to varying degrees. On top of that, the group has recently released their debut album, entitled CALLED. The band has stated their goal is to speak the truth of the gospel message through song while maintaining authentic originality. While the genre fits safely within the pop/rock spectrum, there is also a funk aspect to several of the tunes, along with some really great and moving bass lines.

Musically, the album is fun and done well. A lot of the inspirations feel influenced by 90s alt/rock, but there are also some classic 70s and 80s vibes thrown in as well. "Show Me the Way to Freedom," for example, is a tune that really nails that 90s acoustic rock sound -- both musically and vocally. While most songs are acoustic based, some of the funkier sounding songs rely more heavily on a clean electric guitar, but songs like the rocking "First and Always" feature a great sounding Van Halen inspired overdriven guitar tone. The mixing and mastering here is competently done and the album has a good overall sound.

Lyrically, the songs are based directly on scripture or people important to scripture. For instance, "Teach My Heart" is based on Psalm 139, while "Flicker and Flash" is inspired by Saint John of the Cross. While it was not intended as a curse, I would be remiss in not mentioning the lyrics found in "Souled Out." "Buying their lies when pure grace was free. The sin of self-hate; such misery. Believing we can do it on our own when every day we feel so damn alone," is sung in one of the verses. The song is pointing out the emptiness we all have without our Savior and to not follow those who have rejected His gift of grace -- without which we are certainly damned and alone. All of the songs presented on CALLED were written by the band, but the closer is a cover of Sandy Patti's classic "Via Dolorosa," written by Billy Sprague.

CALLED is a ministry and band that cares about spreading the gospel of Christ. They care that people hear this message and offer several different ways to connect with others. I personally like that they keep all their options scripturally minded with a focus on prayer. Their debut album is an enjoyable listen that should speak to most fans of pop/rock and rock music. I would say that fans of 90s acoustic rock or classic rock styles may find the most enjoyment here, however, those looking for some newer alternatives for worship music may also find some gems to add to their playlist.