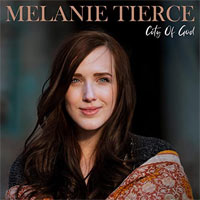 
There is a certain "grassroots church music" trend that has been popularizing within the worship scene. Groups like All Sons & Daughters and Housefires have taken the reach-for-the-sky sound of huge church bands like Hillsong and brought it down to Earth. One of the more recent examples of this movement is the band/collective/label People & Songs and their shining star, Melanie Tierce. Nationally known for a 2016 American Idol audition that left the show's judges in tears, Tierce has since been plenty active in music making. She has contributed to husband Kaden Slay's first release (and they've released a joint album of their own), but City of God: Chapters I & II marks her official debut. The project was released in two parts, but the progression of the tracklist makes it clear that the album is unified in its high-octane corporate worship sound carried by beds of strings and airy pads. Cohesion is an impressive enough trait in regards to a musical first step, but outside of a trademark voice, City of God hardly rises above the trend that it emulates.

With current worship music, most listeners are likely to first be pulled in or pushed away by the artist's voice. There's no doubt that this is Tierce's strong suit. She boasts a distinct, trilling vibrato that doesn't fade; some instances are a little strained or yell-ish, but it is her most powerful tool all the same. She sounds not unlike Kim Walker-Smith, albeit more youthful and less alto. The next common criteria is likely lyrical, which Tierce, although not often original, does prove that she is well-written. After the beautiful string overture on opener "Sing," Tierce heads right for the thoughtful jugular with "If there were no more words on the screen/Would we still know how to sing?" Another highlight of vernacular is found in "What Love Is Like," which is less a praise song and more an analysis of how Jesus handled opposition. Moments and approaches like these do just enough to feel different from the rest of the tried-and-true worship song clichés that this album doesn't avoid.

The final archetype that worship music must address is how the musical aspects itself are handled. This is where the album feels the most amateurish. Variety isn't completely absent - the title track features a fun pizzicato bridge, the Irish-folktune melody on "One More Step" jerks in unexpected ways, etc. - but it is clearly not a priority. Half of the tracklist is composed of individual builds to the point where it's almost exhausting to listen to. The bridge on "Compelled" should be carthatically energetic in its cry of "May the Lamb of God receive the full reward of His suffering," but that effect is subdued by the myriad of other songs that surround it and try to do the same thing. This trope is obviously baked into the style that Tierce is going for, but most songs are too big for their own separate and combined good. Props must be given to a few of the tracks resisting easy closure and resolution ("So Close" and "I Am Your God" pull this off nicely). That is definitely a mark of a creative team having the whole album in mind, but the underlying crime that makes this album feel like so many other worship releases is its treatment of melody and harmony. The compositions are so simple and the vocal lines are admittedly impressive but safe; that combination blends everything together into disengaged similitude.

City of God is an album that actually starts and finishes with promise, but its redundant middle washes out both ends. Lyrically, it is enjoyable to hear some songs that center on Jesus' character rather than just His relationship with us, but musically, the lack of melody and dynamic variety makes the tracklist feel too ordinary. The potential is there for Tierce; we'll just have to see how far beyond her bounds she reaches.