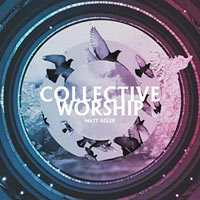 
You might not know the name offhand, but if youve ever been to a House of Heroes, Casting Crowns, or Switchfoot concert, theres at least somewhat of a chance that youve seen Matt Adler. The singer/songwriter and worship leader has been releasing his own music since 2011, with his fifth album releasing this year. Appropriately titled Collective Worship, the songs are simple songs designed for church bodies to sing together. Whether its an adapted hymn, like It Is Well or Blessed Assurance, or an Adler original, the songs are easy to learn, easy to sing, and most importantly, they glorify the Lord. In addition to the songs themselves, there are a few interludes that almost act as mini sermons, as they bring further insight into some of the songs. Matt Adlers Collective Worship should be a great addition to your collection if you enjoy the musical stylings of Chris Tomlin, Matthew West, or Jeremy Camp.
- Review date: 3/14/20, written by Scott Fryberger of Jesusfreakhideout.com

Pulling together an impressive number of musician friends (that include the likes of Stu G from delirious?), Matt Adler is putting the "collective" in his new album Collective Worship. This 13-track record strives to be a unique worship experience unto itself with 6 studio songs, 4 live recordings, and 3 "Collective" tracks in which different people define worship. It does give the album an interesting pace and helps move things along. The songs are also varied enough so that the listener never gets too bored. The lyrics don't break any new ground and are pretty standard fare for the genre, but the overall listening experience is pleasurable. Adler's ambition is noble and noteworthy, and while Collective Worship may not be the best praise album of the year, it's certainly a solid offering. - Review date: 3/14/20, John Underdown of Jesusfreakhideout.com 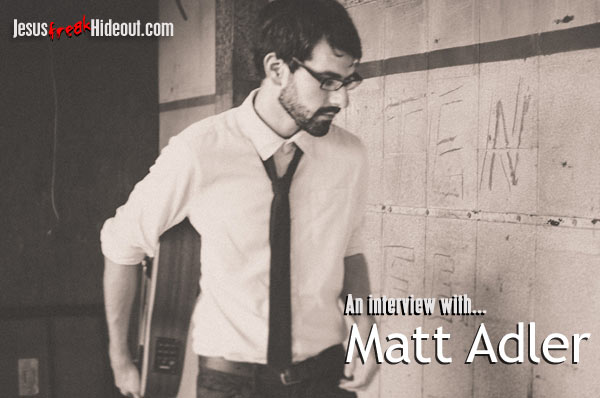 Matt Adler: My background in music? That's a long story! As a kid my grandpa told me he'd give me a guitar, but only if I didn't tell my cousins. I promptly told my cousins and so it was another year - when I was 8 years old - before I got my first instrument. I started leading worship at 14, and started singing that same year. I didn't really "grow into" my voice and gain any confidence in that skillset until maybe my early twenties. And finally, I was always a singer-songwriter, writing songs about whatever came to me. But a few years back, God told me to lay down my singer-songwriter hat in favor of corporate worship music for the church. In this season, I firmly believe that is my calling in this season - writing and performing vertical worship music, collectively. With worshipers from across ages, races, genders, backgrounds, and denominations.

Matt: Absolutely I did. The last record I did came out in 2016. I knew then that the Lord was calling me into corporate worship music, though at the time I didn't have the songs and I didn't know what it would look like. Then I hit a very dark, very dry season of life. A season with no music, little community, spiritual stagnancy, and a lot of hurt. But there was such purpose in that season - to grow me, sanctify me, to make me a better human and worship pastor... And then God woke me up in the middle of the night and gave me the full vision for the Collective Worship album! It was such a cool thing, His voice was so clear and so direct. He gave me songs. He told me who to contact to take part in the project - and almost no one said no! He provided the idea to do 6 studio songs and 4 live songs with worshipers from across the state. And He gave me the name - "Collective Worship"!

Matt: Not easily! 57 total people were involved, at final count - musicians, vocalists, songwriters, mastering engineers, recording engineers, and graphic designers. Working with folks from Georgia to Indiana, Arizona to Tennessee, and of course my home state of Texas - it was a logistical challenge that was so very worth it. There are sounds and words that I never could've made on my own. In the past I have done the vast majority of work on my albums. But God's idea of the "collective" really shone through and made this record sound so very unique. Its creation was such a life-giving and fun process. And the event where we recorded the 4 live songs was among the most memorable experiences of my life. Some of my favorite people in the world, from all across the state, came together in a very cool cabin-in-the-woods recording studio. And we just worshiped together, with cameras rolling and audio recording. It was so very special and I'll never forget it!

Matt: Quite a few actually. The first track, "Released", is about freedom in Christ. That we do not have to be defined by who we once were, our anxieties, shame, and addictions, but that we are a new creation. "Holy Spirit of God" is a simple recognition of the beauty of being able to come freely before the throne of Grace and commune with God. It is a prayer for revival to stir in our own hearts, in the church, and in our communities. "What Love Did" is a modern worship song about Communion - our remembrance of Jesus' death and resurrection as we take the Lord's Supper. There are also a few songs that are more reflective of the difficult season I was in as they were written. "Pray" is an acknowledgement of the truth that even in the midst of the valley, I can trust in God's faithfulness and provision. I can expect the Spirit to cry out on my behalf in times where my words fail me. I'm realizing in this interview that the themes of these songs are quite varied!

Matt: "Collective" parts 1, 2, and 3 were both pre-written AND spontaneous in parts. They were responses to two questions 1) why do we worship? And 2) what is the value of worshiping collectively? I was intentional about the individuals who I asked to do these segments, ensuring that they were reflective of the "collective" idea of the record - across ages, races, genders, and denominations. It was so sweet to track these and to hear these special individuals' perspectives. And logistically, these were recorded to transition us from the polished, pristine studio tracks to the authentic and raw live tracks on the album.

Matt: I was actually raised Catholic, though I now consider myself non-denominational and have for years. But it was as a young kid attending mass that I first heard the words "Kyrie/Christe eleison" As I grew in my faith and was discipled as a young worship leader many years ago, I found such beauty and value in some of the more liturgical elements that I grew up with that I hadn't understood up until that point. Kyrie eleison/Christe eleison means "Lord have mercy" and "Christ have mercy". It is often used within a church liturgy as a response to corporate prayer requests. The postlude of the song references Romans 2:4 directly ("Let Your kindness lead us to repentance") and so the idea behind this song is actually that of confession. Lord, have mercy on us. We are broken but You are good. Lead us to true repentance.

Matt: Only by God's grace. It wasn't necessarily something that I set out to do. God gave me the songs for this project, some of which simply declare truths and minister to the heart of God. And others came out of a place of my own personal walk and struggle. They still declare truths, but are more a time capsule of the heart space I was in when I wrote the song. "You Are" is the last track on the record and pulls from Job and Lamentations. The verses declare truths - of God's goodness and new mercies, and His ability to move unopposed. I mean...He's God! My help comes from Him! Of course, right? But the pre-chorus and chorus are basically desperate pleas to the Spirit to convict me of those truths. To remind me in seasons of doubt where God's voice feels far away. The bridge is just a corporate declaration that God is our refuge.

Matt: Individual worship time is important. My one-on-one time with the Lord is so special and there is incredible value in it. But the Lord has really placed the COLLECTIVE at the forefront of my heart in this season. There is this concept of "thin spaces" where Heaven meets earth. And the Bible says that "where two or more are gathered, I am with them". I feel like when we gather to worship collectively, the Spirit moves. We encounter God in a very real way. There is such beauty when we bring all manner of circumstances - joys and sorrows, victory and defeats - and then sing in spite of those circumstances, declaring corporately that Jesus is better than all of those things. It's freeing. I'd say collective worship is just our way of practicing for when we get to Heaven!

Matt: I just hope He uses the record for His purposes. I want His story to be told and not my own. Whether it affects 1 person, 10 people, or thousands, I just want to be obedient. I suppose my hope is that churches sing these songs together and that individuals have their own personal encounters with God as a result.

Matt: You're about to get the worst response you've ever received to this question! I'm claustrophobic so both sound equally stressful to me! I suppose with that said, I'd say the phonebooth - on account'a you probably couldn't even find a phone booth close enough to me to cram people into!