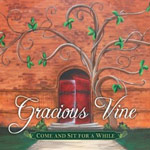 Gracious Vine
Come and Sit For A While

What started as a brother/sister duo and merged into an all-female trio has now become a five-piece pop rock worship band called Gracious Vine. Their latest offering, Come and Sit For A While, is an album full of praises to Jesus, lifted up by a conglomerate of sounds that borrows from different genres, such as blues, country, classic rock, and '90s alternative. Gracious Vine uses the term "mellow rock" when describing their sound, and that's also a perfect fit, because every song is indeed mellow, with a relaxing rhythm and groove. The instrumentation is very basic, with fairly little that falls outside of the bare-bones song structure, but it actually works in favor in this instance. To me, it indicates that these self-taught musicians know their limitations, and rather than attempt intricate melodies and guitar licks, they stay in their zone, and it works. Unfortunately, the opposite applies to the vocal work. Lead vocalist Joanna Fruhauf, who leads all but one song on this album, provides the aforementioned '90s alternative flavor, with a voice that sits on the borders of Alanis Morissette, Dolores O'Riordan (of The Cranberries), and Jennifer Knapp. A lot of '90s alternative failed to age gracefully, vocals not excluded, so while Fruhauf's voice may have sounded great in that era, it's become a bit rough compared to today's pop rock sounds (even without the autotune). And when mixed with the varying genres of the music itself, it just seems out of place. Simplicity is also applied to the lyricism, which seeks to bring the listener's attention to the feet of Jesus for worship and communion. "Here I stand in awe now, amidst a great multitude, pouring out my worship, a worthy sacrifice for You, so I lift my hands to give You praise and to my feet I rise, my random paid, I've been redeemed and pierced through by the fire in Your eyes" is not only a verse from the song "The Lion Roars," but is also a good summarization of what you'll come across as you listen to this album. Gracious Vine's heart for the Lord is evident with Come and Sit For A While, which is always refreshing to hear, but as artists, musicians, and songwriters, they still have some terrain to traverse in the way of becoming the best they can be.