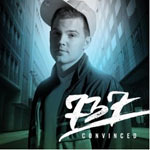 Hailing from Indianapolis, rapper and speaker Jeff McIntosh, better known as 737 (pronounced seven-three-seven), and formerly known as J-Mack, has recently released his newest independent album, Convinced. While Indiana is far from a hot bed for rap artists, 737 is making a strong go of it. While he looks like a younger Joshua Jackson, he doesn't have the Eminem sound you may expect. Instead, 737's sound is more similar to that of Json or Flame (there's even a hint of Red Cloud here and there). Overall, the record is enjoyable. 737 has respectable flows most of the time and good production in the recordings. At times certain lines seem a little disjointed, but for the most part things fit together well as he mixes normal raps along with some faster spitting. The biggest complaint would be cheesiness at times in the lyrics. For example, "He rolled up on a donkey; no 28's" in "King of All Kings," or "Seems like everyone is saying let's party. Wanna do it big while they acting naughty" top the list. Actually, the repeated use of the word "naughty" is nearly unbearable in that track. Overall, the record features solid themes, faith-based lyrics, and good beats. 737 collaborates with D-Maub, Level 316, Dillon Chase, and big-name rapper Json. If you are looking for a new rapper to to add to your collection, give this Indy indie artist a chance. Convinced won't blow you away, but there are definitely some tracks here for rap fans to enjoy. - Review date: 5/8/12, written by Michael Weaver of Jesusfreakhideout.com