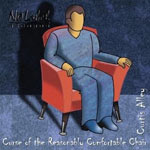 As a 33-year veteran of the music world, Curtis Alley has a lot of experience under his belt. His latest independent album, Curse of the Reasonably Comfortable Chair, happens to be his thirty-fourth independent album. It's a full-length record that spends most of its time drenched in a country/southern rock sound. There are a few other styles that show up here and there, like a bit of electronic flair in the drums of "Lightbox" and "Point In Time." The latter of the two makes for a good example of the weaknesses of the album. Alley's vocals aren't very strong, and the music sounds sloppily-done at times. The electronic drums sound good, but the piano sounds like it was recorded without the use of a metronome, and the player of the piano didn't have very good rhythm. The lyrics seem like they're meant to be sort of satirical, but are really more corny than anything, especially given the context that they're in (the style of music, that is). It all carries itself throughout the majority of Curse... as well. Alley's message is good, however, as Alley warns followers of Jesus not to be content with life, as it's so easy to do all the time, but to get out there and make the most of it. Still, all in all, the music is lacking (and when it's not, it just sounds mostly mediocre), and the lyrics do nothing to challenge (or excite) the listener. Curse of the Reasonably Comfortable Chair will find its way into some listeners' iPods, but will probably be easily passed up by most.