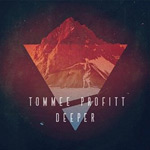 Tommee Profitt is no stranger to the music industry. Tommee has been touring and playing shows since 2003, has released 6 full-length albums, is signed to Capitol Records as a producer and songwriter, and also produces music and videos at his own studio. While Tommee is no stranger to recording and posting funny videos on YouTube (see "The Target Song," "Pregnant and I Know It," or the short film(s) Man vs. Ball), his newest album is anything but a joke. Deeper is a pop/worship album that would fit right at home on today's CCM radio. The album offers songs with an upbeat pop vibe, such as "Your Love is My Victory" and "Perfect Love," but also provides some slower, more worshipful, moments like "You Are My Rescue" and "Deeper." Tommee seems to have a grasp on what many listeners of today's Christian music want to hear and he delivers in truckloads. Profitt is an obviously talented individual, but he tends to play things safe. While there is undoubtedly power and conviction behind Tommee's message, it feels like many of these songs have been done before. Musically, Deeper excels most in the stripped down moments found in "I'm Ready Tonight" and "Spirit Still Moves." Fans of modern worship music and the slightly more poppy side of CCM should definitely find something to love about Tommee Profitt. I can't help but wonder, though, what Deeper may have sounded like if Tommee would've inserted a little more of his sense of humor into this project. There is a fine line to walk when trying to release a serious worship album, but who says an album has to follow a strict formula to be good? A goofy song or two with ridiculous amounts of auto-tune could've been what was needed really set the record off. - Review date: 12/3/14, written by Michael Weaver of Jesusfreakhideout.com