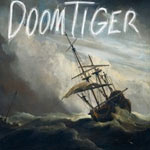 Doom Tiger is an indie death metal band looking to break onto the scene with a lot of youthful energy and hope. The three tracks on the EP are Doom Tiger's first foray into recording. The first two songs feature typical death metal vocals and the final song is a short instrumental. "Babylon Departed" starts things off with the same crunchy guitars that are expected for a death metal band as well as the nearly indecipherable grunted vocals. It's not a a bad song, but the overly repeated and simple guitar riff begins to wear thin after a while. "Revelation of the Forsaken" is up next and features more of the same, but it slows down and meanders off a bit after the opening. The music finally picks back up after the lightly picked background guitar solo ends. "Galen" is the instrumental and is the most enjoyable listen in the bunch, though it really doesn't carry the same death metal vibe of its predecessors. The biggest problem with this EP, hands down, is the mixing and mastering. At no point does the music feel like it's in complete cohesion. This, unfortunately, makes for a tough listen all around. Musically, it also feels like there is no back-end, especially with "Babylon Departed." I'm uncertain if there was even a bass guitar used in the recordings; it feels like mostly drums and guitar. Additionally, it's not as technical, musically speaking, as most established death metal acts are, but the most talent can be heard in the drumming. While not ready for the big time yet, Doom Tiger is valiantly throwing their name in the hat. Fans of the indie death metal scene are most suited for this EP and may want to give it a listen. - Review date: 11/20/13, written by Michael Weaver of Jesusfreakhideout.com