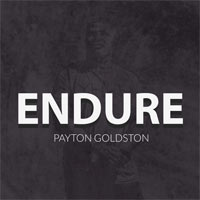 
Having traveled the country and had his music played on radio stations all around the world, R&B artist Payton Goldston is hitting 2020 with a brand new 5-song EP, appropriately-titled Endure. Goldston takes element of R&B, soul, and even a little hip hop, blends them together, and uses the final product to glorify the Lord. Sometimes this comes in the form of outright praise and adoration, and sometimes it's indirectly, as in the love song for his wife, "I'm In Love." The track that is sure to be a fan favorite is "Blessed My Soul," which has a really catchy beat, some more hip hop flavor, and a relatable message, as Goldston sings, "The Father blessed my soul 'cause I've been feeling weary lately / those cloudy days now gone, my praise is going to You daily." It's encouraging, because all Christians know what it's like to be tired - mentally, physically, spiritually - but we know that God gives us rest. While the song has a lot of great attributes, from the music to the message, it also highlights what I think is the EP's main issue. The production quality of these songs is rather low, as the vocals sound a bit more hollow than the music. It's obvious that Goldston is a talented singer, but the production really hinders what could've been an otherwise great listen. And, on the topic of "Blessed My Soul," the guest rapper was a great idea, but it may have been implemented better without Weez the Satellite Kiid's mumble rap style. At the end of the day, it's clear to see that Payton Goldston has a lot going for him, which really is evidenced by much of what he offers on Endure. With some better vocal production in tow, his music could be well on its way to reaching a much larger audience for the Kingdom.
- Review date: 6/30/20, written by Scott Fryberger of Jesusfreakhideout.com