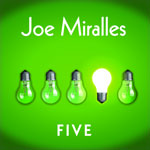 The independent Christian music circuit last heard from from Joe Miralles in 2012, when he released his fourth album, an EP called Under the Sun. Having been hard at work in the last three years, Miralles and his band are at it once again with another EP, appropriately titled Five. The 90s alternative/pop rock that saturated Under the Sun is still alive and well this time around, with "Church Downtown," "High" and "Let Love Take the Lead" serving as perfect examples, reminiscent of bands like Toad the Wet Sprocket. "Forgiven" introduces a banjo and organ to the mix, which, obviously, bears a more southern influence. It goes back to things as usual almost immediately in "Love Someone," which sounds a lot like the Gin Blossoms classic "Hey Jealousy," from the main guitar riff to the melody. Finally, "Give Him Praise" closes the EP in a style similar to a more alternative Big Tent Revival. Now, unlike Toad the Wet Sprocket and Gin Blossoms, Miralles offers up lyrics that reflect Jesus and what it means to be His disciple. "Church Downtown," which was co-written with Paul Colman, expresses the joy of attending church, especially after a harsh week that tried to bring you down with stress and an ungrateful job. "Let Love Take the Lead" is an encouraging song to any struggling believers, "So you lift up your hands into the air, tell Him you can't take more than your share, when you're feeling lost beyond repair, just let it all be, let love take the lead," while "Give Him Praise" is a call to do exactly what the title says: give praise to the only One who deserves it. Joe Miralles' music is comfortable to listen to, especially when you feel like you need an encouragement from the Lord. Critically speaking, it's rather safe and very dated sounding, but it offers a lot for the weary soul. Check out Five if that sounds like you.