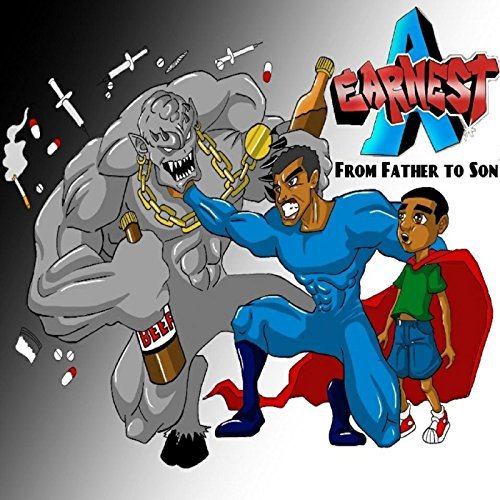 Earnest A
From Father To Son

Formerly known as A.P. da Playa, the Southern Illinois-based rapper Earnest A is hardly a newcomer to the industry. As a member of Dem 380 Boyz, he has released several albums, both solo and with the group. With a renewed focus and sense of purpose that came from a short break from rap, Earnest picked the mic back up, headed into the studio, and came out with his newest album, From Father To Son. The album feels influenced by the old school of hip hop, with encouraging and straightforward raps laid over beats that switch between a 90s feel and modern pop rap (including some trap). Unfortunately, the album seems weighed down with Earnest's flow, as it's pretty consistent throughout, with little deviation from the formula he establishes in the opening track. Additionally, Earnest's lyricism is a bit immature at times; "Hater Shout Out" and the party song "Turn Up" are great examples, sounding reminiscent of Froggy Fresh (except the vocals). Some of the message of "They Say" even seems unnecessarily confrontational: "Though I'm mostly humble, I am not a wimpy guy, if you disrespect my family, you gon' end up in a fight, I've been looked down all my life, but I'm standing tall in Christ, if you try to throw me shade, I'ma scorch you by this light." Earnest's faith does shine through the album, with songs like "Replace You" and "Back To Life" giving glory to God for the new life He gives us through Jesus. If there's anything to take away from Earnest A's From Father To Son, it's that God is better than anything else we can live for. - Review date: 3/21/17, written by Scott Fryberger of Jesusfreakhideout.com